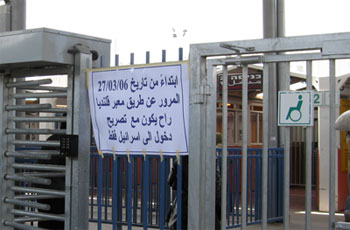 On Saturday March 25 Israeli military placed a notice at the Kalandia checkpoint announcing that from March 27, 2006 only holders of a permit to enter Israel will be allowed to cross the checkpoint to the West Bank village of Al Ramm.

By restricting Palestinian access in this way, the Israelis have effectively annexed the village minus its West Bank residents to Israel. cutting it off from the rest of the West Bank. The restriction will also cement the illegal annexation of occupied East Jerusalem.

The Kalandia checkpoint is flanked on both sides by the annexation Wall. Olmert’s Kadima party has admitted that the Wall is not a temporary security measure as Israel originally claimed but will be Israel’s “permanent border”.