New
Home / Journals / How Can I Stop You?

How Can I Stop You? 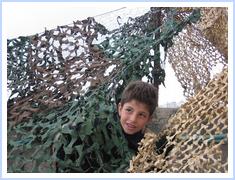 At about 8pm, there was a lot of yelling in the street outside the internationals apartment in Tel Rumeida, Hebron. Israeli soldiers were demanding that men from the building opposite came down to the street. Two men came down. They were told that everyone, including the baby, must come down to the street. An international asked what was the reason for this. A soldier replied that he could not tell her but that there had been a complaint about someone in one of the apartments. He could not say which apartment. This all sounded odd. Soldiers sometimes go into apartments to search but they do not usually expect babies and small children to be brought into the street at night. The soldiers persisted in demanding that the two men bring the families out. The men refused. One man was sent back into the building but the families did not come out. The international rang the DCO (District Command Office). The woman at the DCO said that she would check the matter.

Some more soldiers came by. One of the original soldiers asked the international why she would not let them do their work. She replied “Let? How can I not let you? I can’t stop you.” The soldiers went into the apartment building with guns ready as though after terrorists! They banged on a door. They then came down, let the two men go and left themselves. It looked like bluff. They probably were taking orders from settlers and were not supported by the DCO. This can happen with new soldiers, if the settlers make a complaint, whether based on fact or fiction.

Al Jazeera newsmen were visiting Tel Rumeida. They telephoned and asked an international if she had film or video of settler attacks on Palestinians or Palestinian buildings. She went, with a Palestinian, to the Al Azzez house to collect material. This meant scrambling over rocky ground because only the family are allowed to use the track alongside the settlement, which replaces the street taken over by settler caravans. When they were leaving the house, Israeli settler children came on to Palestinian land and threw rocks ( 3inches or 8cm in diameter) at the owner of the house and the people leaving. At first, the one Israeli soldier nearby did nothing to help. However, another four soldiers arrived. Even then, some children continued to throw rocks for some minutes before the soldiers forced them to leave the area. No one was injured but the visitors had to dodge and duck away from rocks which could have caused serious injury. There is no safe way to leave the area!