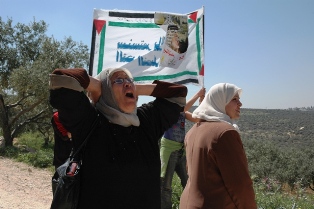 Living in the settlement building just up the road a few hundred yards from the violent episode described below is Baruch Marzel, extreme right winger, well known for his hatred of Arabs and support for transferring all Palestinians to Jordan. His wife and son are among the worst for attacking the Palestinian inhabitants of Tel Rumeida. He is standing as a candidate in Tuesday’s Israeli elections

My first evening in Al Khalil/Hebron. I have just poured myself a cup of tea and Mary is telling me about the situation here. There’s a commotion outside and we go to investigate. As we come down the stairwell a young boy says “soldiers, soldiers” and points into the apartment.

On entering the apartment of Radey Abu Aesheh I see first one soldier, gun raised and pointing at people, then I see another and another, 6 altogether. All with guns raised. The apartment seems full of women and men shouting, there are 5 or 6 children. Radey Abu Aesha had been hit in the mouth. Hasan Abu Aesheh tells Mary the soldiers kicked him.

Suddenly the soldiers decide to leave and back down the stairs. Perhaps there were too many people for them. Many people follow, shouting their greivances at the soldiers for entering their home and their violent behaviour. The soldiers are shouting back. The Captain of the soldiers says they went into the house because they heard shouting, nobody believes this.

More soldiers and Border Police arrive until they are very many. The Captain confers with his men. They decide they want to take Bilal Abu Aesheh. In the chaos I don’t know if the soldiers reentered the building. What I saw was 4 soldiers wrestle Bilal to the ground and handcuff him with plastic cuffs behind his back, using aggressive force, banging his head on the ground. After he was cuffed a soldier approached him and kicked him. The Police arrived and he was taken away. Besam persuaded everyone to go back into the building. We stood at the entrance. The soldiers decided they wanted Husan. Soldiers surrounded the doorway, they tossed me aside. Mary refused to let them enter saying “ these people are my family, you can’t come into my house”. They hesitated, they yelled at the Palestinians inside. Husan appeared on the stairwell. They grabbed Mary very roughly twice and threw her aside and grabbed Husan. They pushed him up against the outside wall of the building and rubbed his face across the stone. They hit him and threw him on the ground, they kicked him. They cuffed him behind his back. The women are screaming out of the windows. They take Husan behind one of their vehicles.

For me when I see a Palestinian being taken behind a vehicle I think he will get beaten so I stood nearby, the 2 soldiers guarding him demanding ‘get back, get back’. A large man in civilian clothes shone a bright video camera light in Husan°s eyes and filmed him. He stood right over him as Husan was crouched down on a low ledge. I turned my back for a second, on turning round Husan signaled with his eyes and motioned that the man had spat at him. An action I had half caught in the corner of my eye. Then I understood the man was a settler. The soldiers continued to let him stand over Husan and verbally abuse him. Soldier had lined up behind vehicles and trained their guns on the building. It seemed to take forever before the Police arrived again and Husan was put in the back of their vehicle. Mary said she wanted to go with Husan and the Police did not object, so she climbed in too.

In Radey Abu Aesheh’s home the wait began. The street had been closed but now people began to arrive. The older men clicked their prayer beads whilst they talked. Women made coffee, peeled oranges and apples. Yechye, a lawyer, regularly rang the Police. No news, no news and then bad news, Bilal and Husan were accused of attacking the soldiers. Radey Abu Aesheh says “Bush is claiming we are the terrorists and all the Euopean Governments go along with him and support him. But look how Palestinians are treated, you can see the reverse is true”. Rajab Abu Aesheh says “The settles want the Palestinians to leave the area but the people will not follow this plan, so they are harassing us to force us to leave, but we will not leave until we die and this will be transmitted from son to son”.

Suddenly the police tell Yechye good news, Mary, Bilal and Husan are all being released. It’s a fast walk up hill to get to a car. It’s parked outside the Israeli controlled area, where Palestinians are not allowed to drive. We skirt round Tel Rumeida in the car, to get back to almost where we had left the house and on to the Police station. At the gates of the Police station, Yechye has to stick his fingers though the metal gate to use a phone to communicate with the Police inside. At midnight, the 3 are released. Mary who mis seventy five years old has also been accused of attacking the soldiers. Husan is very sore and bruised, he has blood in one of his eyes.