Just Another Day in Tel Rumeida 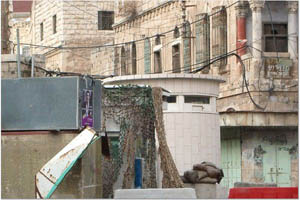 At approximately 11:05 a.m., three eggs were thrown out of the window of the Beit Hadassah settlement at two HRWs (human rights workers) and a group of Palestinian school girls on the street below. The soldier on duty at the time called for reinforcements and approximately six or
seven additional soldiers arrived and remained at the IOF post until the school run was over.

Later on a HRW was walking down from the olive groves by the Cordoba school when a Palestinian youth called him over to talk. The HRW went into a house with the youth and found many Palestinian men who were concerned over the presence of some soldiers in their attic. The house in question had a history of soldiers entering uninvited, making themselves at home, leaving trash and destroying furniture. The HRW called another HRW to come over to the house and help assess the situation. Both HRWs then went upstairs and found six soldiers sitting
in a small attic. The owner of the house pointed out a bag of trash that the soldiers had thrown into the water tank on the roof just outside. When the soldiers saw the HRWs, they immediately began packing up their things to leave. One of the HRWs asked the soldiers what they were doing there, and if they would please remove their trash from the water tank. The soldiers responded that they were leaving and after some more encouragement from the HRWs, removed the bag of trash from the water tank and left. 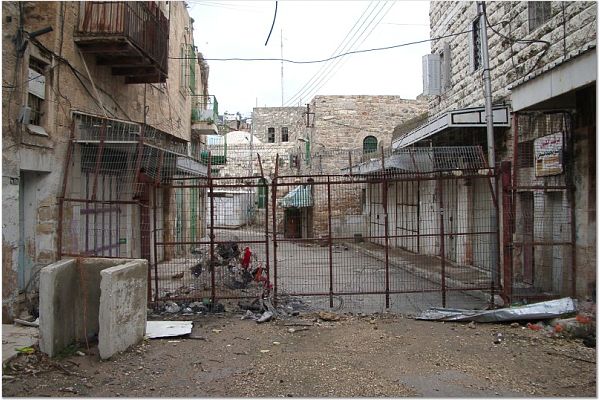 A “security fence” in downtown Hebron photo by Chris

At approximately 6 p.m. a HRW was walking toward the apartment on Tel Rumeida street when he noticed a police car parked in front of the grocery store at the top of the hill and many Palestinian men gathered outside the store. The soldiers had two Palestinian males approximately 20-24 years old against the wall of the store and were searching them repeatedly and roughly. The HRW approached the soldiers and asked what was going on. The soldier stopped searching the men and said the they appeared suspicious and that they would be detained until the soldiers were satisfied they were not terrorists. The soldiers took the Palestinians across the street and told the HRW to stay away from them. Two police cars arrived. About 10 minutes later, another HRW arrived and asked the soldiers why the men were being detained, if they were suspected terrorists, when they would be released and if the soldiers had the men’s IDs. The soldiers responded that they would be released soon. About five minutes later the men were released.

Last night I was walking home with a few friends and we went through the checkpoint that separates the Palestinian controlled part of Hebron from the Israeli controlled section and saw that two of our neighbors were being detained. We asked them how long they had been held for, and they said two hours. We asked the soldiers why the Palestinians were detained. They said it was because they had to make sure that a CD player and a desk that the Palestinians were bringing through the checkpoint were neither stolen nor explosives. I kid you not. They thought the CD player was an explosive. I tried reasoning with the soldiers for some time and then called Machsome Watch, an Israeli human rights group that monitors checkpoint harassment. The nice lady from Machsom Watch called the IOF headquarters and succeeded in getting the men released.