Settler Grafiti on a Palestinian home in Tel Rumeida

There is enough drama here for 10 seasons of some ridiculous reality show. I really think that there should be such a show in Hebron because it would allow the rest of the world to see what is going on here. If people knew, they would find it unacceptable.

The reality of violence and intimidation is beginning to affect me in that I accept it as part of normal life in Hebron. Tell another person living in Palestine about some horrible situation you were in and they barely bat an eye, something equally horrible or worse happened to them the day before. And I’ve only been here a little over a month.

Here’s a typical story from Tel Rumeida: Last Saturday, Ahmad who is eleven years old was playing soccer outside his house with his brother. Like many houses in Tel Rumeida, theirs is adjacent to a settlement. Ahmad’s brother saw 6 or 7 adult settlers approaching, one about 55
years old, the rest in their 20’s. He yelled to Ahmad to run back to the house and the settlers began throwing rocks at the children. Ahmad was hit in the eye and on the head with two rocks, causing him to trip and fall as he was running away. He broke his arm when he fell. 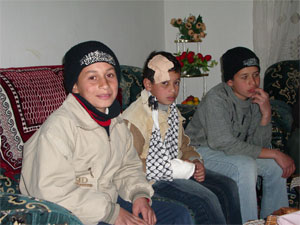 Ahmed sitting between his brothers

His father took him to the hospital. His mother wanted to come with them but their daughter saw settlers approaching the house throwing rocks, so the mother took the daughter to a neighbor’s house, then went to the hospital.

What kind of place is this where a mother has to make sure her daughter isn’t in danger so she can go see her eleven year old son, who was just attacked by seven adults, in the hospital???

The family called the police when they got back from the hospital, but since the Israeli police have juristiction over Tel Rumeida, not the Palestinian police, it did not help.

Ahmad has nightmares now, and did not go to school for 5 days because he was frightened.

We need help here. We need your help. Please come to Palestine or find some other way to assist. Volunteer your time to an organization working for peace, donate money if you can, write letters to your representitives. This is normal, everyday life for people here and I wish it wasn’t. Right now I am working with 4 international volunteers in Tel Rumeida and we need at least 6.

See the previous post for more stories from Hebron.

We need people here in Tel Rumeida to protect children from violence, to encourage the soldiers to protect Palestinians from settler violence, who will stand up and not be intimidated when the Israeli special forces enter the neighborhood, demand our passports and take down the
information, like they did yesterday. The Israeli authorities deported an ISM volunteer a week ago. But we will not go away. We must continue to observe, intervene, record and write reports in the hopes that someday things will change.

You have more in common with these people than you realize. We are all human beings and in order for there to be peace in this region we must all let go of our prejudices and loyalties to our races, our religious groups, our nations or our cultures and allow ourselves to see every person in this world as our brother or sister. In this global and interconnected society what hurts Palestinians will eventually hurt us and what is good for Palestinians is also good for us.