Beit Sira Replants Trees in the Shadow of the Wall

The demonstration today in the village of Beit Sira was a peaceful march of one hundred people to the village land where olive trees are being uprooted to make way for planned route of the annexation Barrier. The Route of the Barrier in Beit Sira is designed to annex the Makabim settlement and more of Beit Sira’s land to Israel. To the left of the crowd, on the hill bulldozers were seen working on the wall’s foundation throughout the day.

We walked in the direction of the site until they reached the line of Israeli soldiers waiting to block us. We were dismayed to see that the same border police unit who had shot Matan Cohen in the eye and Hussni Rayan from close range waiting for us. A stand off ensued in which both the soldiers and the demonstrators behaved in a restrained manner. A village elder negotiated that a group of us would cross the road (which had been partially destroyed by the Israeli Military) in order to replant trees. While one group planted trees, the rest of us chanted, while being flanked by mostly border police.

After finishing, the internationals formed a line between the border police and the demonstrators, and after approximately 20 minutes, the people all moved back to the village. As opposed to the previous demos in Bet Sira, there were no injuries at today’s demonstration Another demonstration in Bet Sira is scheduled for this Friday. 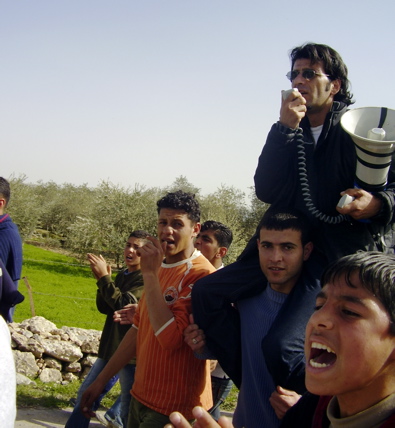