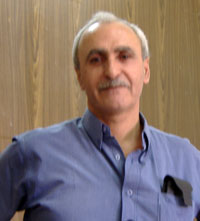 I am honored that the American Friends Service Committee, winner of the 1947 peace prize, found in my modest contribution to the cause of peace and justice in the Middle East important enough to nominate me for the Nobel Peace Prize. I am more honored that AFSC has chosen me for the same reasons I consider to be my most valuable contributions, namely my involvement in civil based resistance against occupation, oppression and injustice.

Even when I was the one chosen for nomination, many more great people, whom I worked with shoulder to shoulder and learned much from their courage, wisdom and creativity are a major part of this nomination.The people of my little town Beit Sahour, who showed me how much power peaceful freedom lovers store, and the wonderful people of the International Solidarity Movement, who not only stood firmly at the peace and justice side, but also practiced their faith with courage and determination.

I see this nomination as a valuable recognition from a respectful peace organization to the collective work of thousands who have chosen to fight oppression and injustice with their determination, courage, faith and bare hands. It is more dedicated to the most courageous among us, especially the dears we lost along the road; to Rachel Corrie and Tom Hurndall.

It is also an honor that AFSC decided to nominate Jeff Halper. Being a conscious objector with a strong critical voice, a committed person to the cause of peace with justice, and an activist who has the courage to swim against the tide and take considerable risks, makes the nomination even more meaningful.

The honor I received by the nomination is also a strong statement of recognition of the legitimate rights of my people, a cry that peace neither can be achieved, nor can be sustained in the absence of justice, and that working for peace and justice is not a mere conflict management.