What Is Holy Here? 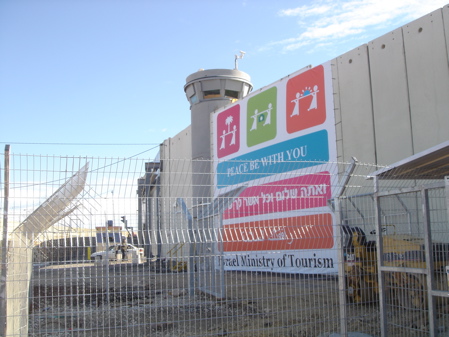 I’m overwhelmed by the desire to share what I’ve learned this week in Palestine, but also overwhelmed by the size of that task. We completed the Birthright Unplugged tour last night, and it’s hard to believe it was only a week long. The amazing people I was blessed to meet, the horrific abuses I was forced to see, the institutional violence I was part of witnessing, the challenges I began to understand, the hope and courage I had the privilege of honoring…so much to tell you…

The Wall is called the Separation Wall, the Apartheid Wall, misnamed the security fence. It’s misnamed for both the security and the fence; 3-stories high, permanent concrete blocks wedged shoulder to shoulder, with watchtowers spaced throughout. It is not an overstatement to say that the Wall is creating a prison out of the West Bank.

Most people think that the Wall follows the Green Line (the armistice line of the war of 1948 that forms the de facto Israel/Palestine border and which, under international law, separates Israel from the occupied territories). Let there be no confusion. It does not. The path of the Wall steals 10% of West Bank land into Israel. Though still only partially built, it snakes around the West Bank, carving once-contiguous areas into separate regions, unable to access each other. Its path runs around illegal settlements, de facto annexing them and the land they are on into Israel.

The policy is clear – the most land with the fewest Palestinians is seized. Once the Wall is completed (its planned completion route is public information), the entire West Bank will be carved into non-contiguous “bantustans” that can only be connected by road through illegal Israeli settlement territory.

There is also an infrastructure of roads that cuts through the remaining connected parts of the West Bank, allowing easy access between Jerusalam and all its “suburbs” (settlements). At its deepest point, the Wall cuts into the West Bank 22 kilometers (13 miles). This is all Palestinian land.

I walked through the Bethlehem checkpoint, now called a “terminal.” That’s very much what it looks like, a massive structure, wedged between the Wall on either side. It’s a sterile building compared to an airport terminal, yet more like a prison with a system of electronic doorways, metal detectors, and soldiers behind bulletproof glass. Above is a platform where at least one soldier stands with his gun pointed down. At the entrance is a banner the height of the Wall: “Peace Be With You” in Hebrew, Arabic, and English. It’s pink, green, and purple, with Israeli Department of Tourism at the bottom.

The Bethlehem terminal is well into the West Bank. Perhaps the department of tourism is confused. I pass through without incident, and turn back to get close to the Wall. I stand up right against the hard concrete, look up, concrete to the sky; look right, left, concrete to both horizons; cry, kick, yell. Silence. I don’t know what to do. I have never been in a ghetto before…

What is Holy Here?

Hebron, Al-Khalil by the Arabic name, is a Palestinian city in the West Bank, 35 km from Jerusalem. Throughout the West Bank, most illegal settlements are built either as “suburbs” to Israeli cities, or further east in rural areas (most of which will soon be annexed into Israel de facto by the building of the illegal Wall). But in Al-Khalil, a group of extremist settlers have planted themselves in the middle of the old city, the heart of the city. The daily violence they cause has forced Palestinians to flee the old city, leaving behind abandoned homes and stores that the settlers will soon take over, excavating the area and confiscating land.

In the mean time, the doorways are covered in anti-Arab graffiti. To date, 840 shops have closed. The corridors echo. The Israeli army, which is supposed to have military jurisdiction over only half of the city, currently controls all of Al-Khalil. There are about 200 settlers in the city, and about three soldiers per settler. The main road of the city has been closed off for Palestinians. All of the gates to the old city, except for two, have been walled. Of the two access points, one has an x-ray machine that all Palestinians must pass through, including children. The Hebron Rehabilitation Commitee (HRC), an amazing Palestinian organization, works to rehabilitate buildings within the Old City to try to encourage Palestinians to return to their homes and shops, so that the settlers will not confiscate their property. They are fighting an uphill battle.

On the tour with Walid Abu-Al-Halaweh of the HRC, we hear of settler violence happening nearby. We go to the place where the settlers have just left, and the ground is covered with rocks, some the size of my finger, some the size of both my fists. We follow Israeli army guards to the noise.

About 20 girls, none looking older than 14 or 15, are screaming, screaming. They are being gently cloistered by the army officers as they continue to scream at the Palestinians around them. The Hebrew is translated for me: “get out of our country, you’re dirt, you’re scum.”

We stand with a group of Palestinian men, women, and children, watching them… or rather, our group is watching them. The Palestinians are mostly waiting to get through the gateway that the girls have effectively blocked now for 20 minutes. Three girls break through the acquiescent army line and race towards us, where another officer holds them.

Grown Palestinian men beside me run backwards. I am shamed for the men, at the humiliation of having to fear a 13-year-old girl, because they know what the soldiers will do to them if they act in self-defense. They are afraid of the girls, with Jewish stars around their necks, screaming filth at their neighbors. The soldiers, who look no older than 19, speak softly with the girls, then turn around to scream and threaten the Palestinian crowd, telling them that if they take one step forward, there will be consequences.

For me, as I watch a people to whom I belong behave worse than any animal on this earth, feet planted, fists clenched, I stare into the eyes of the girls, hoping to communicate to them their own shame. I stare into the eyes of the soldiers, “I am witnessing you, you cannot be held unaccountable.” Finally, the girls are subdued and moved back to the gateway they came from, a gateway that has been built from the ruins of the home of Hashem, our tour guide of the afternoon.

He says that most settler violence happens on Friday and Saturday, on the Jewish holy days…

To Exist is to Resist

1948, known to Palestinians as Al-Naqba, “the catastrophe,” is not some faraway historical moment for Palestinians. For most people, it is the year their family lost their land.

I stayed with a wonderful Palestinian family in Dheisha refugee camp – Sa’de, Nahade, Amani, Jasmine, Wajde, and Sha’de Alayasa. Their family fled from their village of Zacharia in 1948. Upon returning to their village at the end of the war, they were told they could not longer enter. They had deserted their land. It was now a closed military zone, soon to be occupied and turned into a Jewish Israeli neighborhood. No one in the family has been to the village land since 1972. No member of their family is currently allowed to enter Israel. Two generations later, they continue to identify as coming from Zacharia, though both generations were born into the close-quarters of Dheisha, not far from the Wall.

The story is the same for family after family, some who still keep the key to their front door in their refugee home.

Inside Israel, the story is hardly different. During 1948, while some villagers fled from the war into the West Bank or Gaza, some further into Lebanon, Syria, Jordan, and Egypt, some also fled to what remains Israeli land. They built new villages, sometimes less than a few miles from their old, now razed or occupied villages. Over 100 of these villages are still “unrecognized.” Since the Israeli government does not recognize them, they do not provide them with water, electricity, or any infrastructure whatsoever, including schools or clinics. Yet, all citizens in the state of Israel have a right to these services.

I had the honor of talking with Mohammed Abu-al-Heja, the original lead organizer of the Unrecognized Arab Villages of Israel. Mohammed, originally of ‘Ayn Hawd village in the North, started organizing for the rights of his people in the 1970s and lives adjacent to his former village. Presently the land and homes of his village are occupied by the Israeli town of Ein Hod and Nir ‘Etziyon. Joined by other unrecognized villages throughout the State, they are slowly getting the Israeli government to recognize their new homes. So far 5 villages have been recognized. Mohammed is a charismatic man, slight in build with fiery eyes. Although well into his 60s, he is not quitting the fight any time soon…

The Wall, the checkpoints, the Israeli army at every turn, the fight for basic human services, the number of adult males held in detention or prison at any one time, the refusal to allow access to farm lands; all of these actions, including closures on villages, towns, roads, and homes seized between the wall and barbed-wire fences, increasing unemployment, continued dispossession of land makes it impossible for justice for these occupied people.

The continuous threat of violence…hope, faith, organizing, getting pushed down, getting back up, resisting….

Love and anger and sadness and shame and fire and loss and tears and hope.

Marjorie is a young Jewish-American from Boston on her first trip to the West Bank. She is with Hannah and Dunya of Boston to Palestine, who have started the separate Birthright Unplugged organization to give American Jews a chance to witness the occupation.