New
Home / Journals / Life in Tel Rumeida; “It is clear who are the terrorists around here.”

Life in Tel Rumeida; “It is clear who are the terrorists around here.”

The city of Hebron (al Khalil) is divided into two areas, one controlled by the Palestinian Authority (H1) and the other controlled by the Israeli military (H2). Tel Rumeida is a Palestinian majority neighborhood in H2 with two illegal (under international law) Israeli settlements named Tel Rumeida and Beit Hadassa. The settlers of Tel Rumeida pose a daily threat to the Palestinian residents of this neighborhood. These settlers would be on the extreme right side of the political spectrum, more to the right than your average Zionist. In addition to harassing Palestinians, some of them have squatted in currently unoccupied Palestinian homes, refusing to leave. There is supposed to be an evacuation of these squats in a market in the old city on January 28th.

Recent acts of violence against Palestinians include physical assaults on children going to and from school, throwing light bulbs filled with red paint at children, rioting, shouting insults and threats, and throwing rocks and garbage. The settlers kids here are absolutely out of control. Saturday the 21st was my first day in Tel Rumeida, and group of boys called us anti-Semites bent on destroying the state of Israel. They usually get away with their violent behavior because the IOF soldiers are reluctant to get involved in violence against Palestinians because they are here only to protect the settlers.

Why are they behaving this way ? They believe the state of Israel has forsaken them by removing settlers from the Gaza strip. They feel that the West Bank is nothing more than Judea and Samaria, part of Western Ertez Israel (the Land of Israel). Having the state of Israel within pre 1967 borders apparently is not enough. American Jews are being recruited by the right here to come and be settlers all over the country. We ran into a group of them the other day and they called us pieces of shit, prostitutes and said they hoped we get raped by the Arabs.

Why is ISM here? There has been a need for international observers and accompaniers to record harassments and violence against Palestinians and act as escorts for children coming to and from school. Our presence is intended to give Palestinians some sense of security, so they can go out and their children can play in the street, and to pressure the Israeli Military to respond to and prevent settler violence against Palestinians.

Today was my first day working on the school route. It was quiet for the most part, aside from some Americans coming to visit the settlers who told us to go home, and some other people asking me what I was doing. I met a Tel Rumeida resident named Hashem who invited myself and another ISMer to his house for tea and occupation stories. Hashem’s home is located directly underneath the Tel Rumeida settlement and he took us for a tour of settler damage to his property. He showed us where settlers had put up barbed wire and razor wire around his house,

where they had cut his olive trees in half,

dumped garbage into his yard,

threw a washing machine at him,

broke windows, (he had to put up the metal window covers you see in this picture),

his nephew Yousef is holding up a rock wrapped in a kerosene soaked cloth which was set on fire and thrown at the olive trees.

We watched several video tapes of settler mobs vandalizing Palestinian property. Gates were kicked in, property was smashed and thrown on the ground outside, rocks were thrown at windows. In the video the military was standing around doing nothing.

I asked Hashem what international volunteers can do for the situation. He said that the best thing we can do is to educate Americans about what is going on. He said most Americans believe Palestinians are terrorists but, he said, “it is clear who are the terrorists around here.”

are these the Palestinians your government warned you about ? 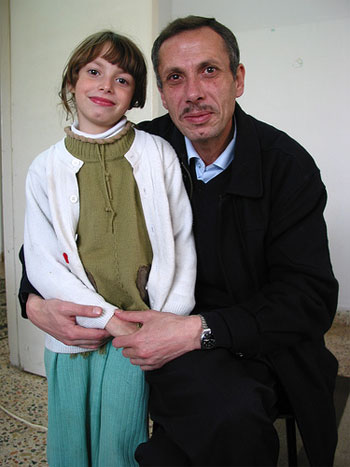