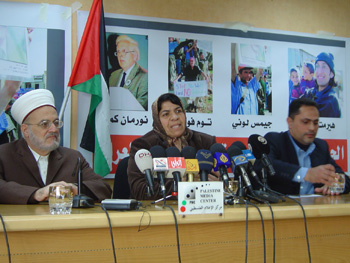 Today in Ramallah, Ikram al-Sabri, the head Mufti of Palestine, along with several other notable Palestinians called for the immediate release of all civilian hostages in Iraq, with particular reference to the four Christian Peacemaker Teams (CPT) hostages.

Ikram al-Sabri said that “there is a duty for all Palestinian people, institutions and factions to commit to sending a call to release these people who have been kidnapped. They are very important for us to help continue our struggle, whether here in Palestine or in Iraq, to gain our country’s freedom. We repeat our call to release all the civilian people who have been kidnapped all over the world, not only these four.”

Dr. Wasif Abu-Yousef, a representative of the National and Islamic Forces in Palestine (an umbrella group representing all Palestinian political parties) described the four activists and CPT in general as: “soldiers for peace” and “real heros” and talked about the role of international activists like the CPT: “they were chaining themselves to homes that were threatened with demolition. Some of them were even martyrs, like our friends Rachel Corrie and Tom Hurndall. Some were injured or denied entry, some of them have been deported. They have suffered side by side with us … they have challenged the Israeli occupation in Palestine and the settlers in Hebron”. He strongly condemned the kidnappings saying: “from the heart of Palestine, we condemn and are completely against the process of kidnapping these four people in Iraq. This state of chaos, killings, and criminal acts that have been happening in Iraq will not help the Iraqi people. On the contrary, there are people who will make use of this. The occupation will use this as an excuse to continue.”

Ferial Abu-Hakil, the Headmistress of Qurtuba school, Hebron talked about the role of CPT in Hebron in providing accompaniment for their children on their way to school and of the unique role of CPT under Israeli curfews during the intifada: “We still remember the nice moments while we were under curfew with the CPT members who we have known since 1995. They came and gave food to people under curfew and showed their love and solidarity with our schools and our children. We will never forget these moments, because the CPT were the only people standing with us at that time… As a women who works with them, I send my call for the Iraqi resistance to release these people because CPT are very important people for us.” She also criticised the US occupation of Iraq as the root cause of the violence there: “To Bush I say that democracy is not imposed – democracy is given by people, not given by armies. We are sending our call for the faction that kidnapped these people in Iraq to release them immediately because we need them here.”

Christan Anderson of CPT Hebron thanked the “hundreds of Palestinians who have issued statements and supported us during this past week”. She described CPT’s work in Palestine and Iraq and appealed for the release of the four, while at the same time putting these kidnappings of westerners in the broader perspective of the huge suffering of Iraqis and Palestinians: “We miss our friends and desire them to return to us… So while remembering them, let us remember the thousands of peaceful people being detained by occupying forces throughout the world, and while we ask for a release of our friends, we will continue to work to end the occupations in Palestine and Iraq.”

A demonstration calling for the release of the four will be held at 12:30 tomorrow in Hebron in front of the Red Cross building, on Ein-Sara street.

On Wednesday the 7th, a candle-lit demonstration calling for the release of the four will be held in Ramallah meeting at al-Manara at 4:30pm.