Resistance in the South Hebron Hills

In early January, ISM activists visited the villages of Um al-Khair and At-Tuwani in the South Hebron hills in order to participate in renovation work on ancient caves and to bear witness to recent settler violence in both villages. The villages are located in Area C of the occupied West Bank, occupied Palestine, an area controlled entirely by the Israeli civil administration. It is an area that makes up 61% of the West Bank, with a settler population of almost 400,000, and a Palestinian population of just 300,000. Settlements are considered illegal by the international community, yet they continue to expand with the support of the Israeli State and their international allies. 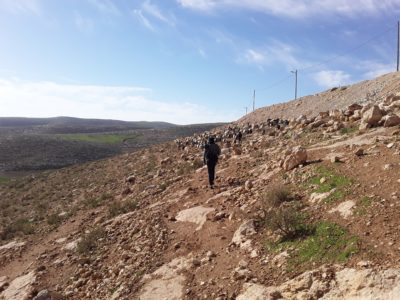 The people of Um al-Khair were displaced from al-Arad during the Nakba in 1948, and in the early 1960s purchased the lands of Um al-Khair from Palestinians for 100 camels. These rocky hills and green winding valleys have been their home ever since. Living as refugees, the community of Um al-Khair continue to face racism, discrimination and land theft due to the existence of the illegal settlement of Carmel, the development of which began in 1980. True to the standard procedure of settler- colonialism, the first step was the construction of infrastructure- highway 317, a highway that would connect the outposts of Susiya, Ma’on, Beit Yatir, Asael, Shim’a and Carmel. Subsequently, a military base was placed less than 100 meters from Um Al-Khair and the year after, Carmel outpost was constructed and expanded over time. Research by Bimkom, an Israeli human rights group, shows the gradual expansion and the future plans for the settlement, which will see it grow to occupy more than five times the amount of land it currently has. The settled area will virtually almost enclose Um al-Khair. Within few years, the inhabitants of Um al-Khair fear that they won’t be able to graze their sheep on the surrounding mountains, on land expropriated from the Bedouin community.

Carmel is so close to Um al-Khair that if you peer through the barbed wire it is possible to see inside the windows of homes in the settlement. Despite their closeness, the two communities are worlds apart. Carmel looks like an American suburb. Its well paved roads and large detached houses with green irrigated gardens contrast starkly with Um al-Khair. The villagers’ many efforts to connect to the electricity grid, get appropriate sanitation and sewage services, and even have permanent structures have all been blocked by the Israeli state. Currently, every structure in Um al-Khair bar two have demolition orders against them. 13 demolitions have been carried out by the Israeli military in the past, with 8 demolitions occuring in 2008. The village community has repeatedly applied for permission to build on their land. This would officially recognize their existence, and reduce the chance them being expelled according to Israeli law. All attempts have been unsuccessful. This is apartheid in action- one set of policies for Israelis and another for Palestinians. 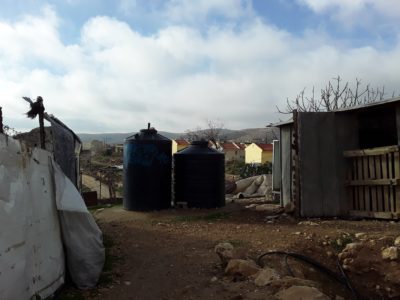 Buildings of Um al-Khair, under threat of demolition, with settlement homes visible in the background.

As well as regular violence from state forces in the form of housing demolitions, the villagers also deal with harassment from settlers on a constant basis. Settlers resident in Carmel as well as representatives of Regavim- a far right pro-settler NGO- regularly carry out invasive surveillance on Um al-Khair, flying drones over the village, reporting building or refurbishment efforts to the Israeli army, and filming and harassing shepherds as they herd their animals. Harassment from Regavim representatives took place on the morning of January 10, when a person began filming activists and shepherds, accusing them of crossing onto land claimed by the illegal settlement. After a short argument, he acknowledged the fact that the disputed land belongs to Um al-Khair.

The villagers in the south Hebron hills are subject not only to discrimination and harassment in shape of surveillance, control, limitation of movement and access to resources. With the growth of Carmel settlement, locals have experienced an increase in violent attacks on their unarmed peaceful community. In recent years, settlers have repeatedly thrown stones at people and buildings. In 2000, a shepherd, the brother of our host, was spotted by Carmel settlement security walking on Um al-Khair land close to the settlement. Security personnel fired at him but did not hit him. He escaped and hid in Um al-Khair. Shortly after this, soldiers came on the order of the settlers, found and beat him up so severely that they caused brain damage. Eighteen years after, he is afraid of people, wanders the outskirts of the village all day, avoiding contact even with his own family. In the words of our host “We lost him, he’s with us by body, not by soul”. In 2008, our host’s stepmother attempted to fetch a donkey that had wandered off into a settlement area. At the time, no fence was separating the two communities. A settler saw her and without warning shot at the woman, severely wounding her. The woman was arrested as soon as she was discharged from the hospital. The settler never faced any criminal charges or a trial for attempted murder. While these are only the worst stories, the inhabitants of Um al-Khair are often harassed by settlers without any provocation on a regular basis.

The community of Um al-Khair have stood strong against decades of state and settler violence, using a variety of non-violent tactics. These include: protest and direct action against demolitions, pursuing legal challenges against the illegal settlement, and international advocacy with political bodies in Europe and the United States. Youth from the village established the Good Shepherd Collective which organizes and raises awareness of the situation in the south Hebron hills. One villager has even presented his handmade models of Caterpillar vehicles in the European parliament, using them as a tool to raise awareness of the Caterpillar boycott- a part of the larger BDS movement called for by Palestinians.

The refurbishment of caves and rehabilitation of farm and grazing land is another example of the creative methods of resistance used by Um al-Khair in the face of illegal occupation, and what ISM activists visited the village to work on. The work took place over two days as we focused on clearing animal waste out of one of the caves which has been used as a shelter for goats in recent years. If ever there was an example of joy as an act of resistance, this work was it. We worked together with locals on the cave, and we laughed and drank tea as much as we shoveled goat shit! While there is much work to be done, the locals hope that this cave will one day be a museum and cultural activity center that tells the story of the people of Um al-Khair, past and present.

Leaving the village, we walked with shepherds from Um al-Khair to the village of at-Tuwani. While the villages are linked by a large highway, it is not possible for Palestinians to use it as it is for settlers. Palestinians risk attack or arrest if they walk close to the road. Crossing the hills, we passed by the illegal settlement of Ma’on, and the outpost of Havat Ma’on on a forest-covered hilltop. Havat Ma’on is controlled by a small number of religious extremist settlers and is currently not recognized as a settlement by Israel. Despite this, its residents benefit from army and police protection and can use all of the colonial infrastructure that links illegal settlements in the West Bank. The Havat Ma’on settlers are infamous for their violent attacks against schoolchildren walking their route from the village of at-Tuba to the school in at-Tuwani. The shepherds of at-Tuwani report being harassed weekly by the Havat Ma’on settlers who call on IDF soldiers to arrest shepherds grazing on what they regard as too close to their forest. 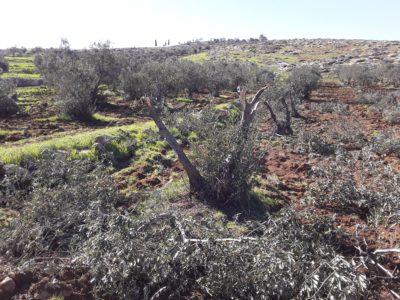 Olive trees cut down by settlers in at-Tuwani

The olive groves of at-Tuwani were vandalised by settlers on the night of January 7 2018, shortly before our. visit. They cut over 18 olive trees and spray painted Hebrew graffiti on nearby stones, which translated to: “Pay the price” and “death to the Arabs”. This is a common occurrence, and since olive trees are an important source of food and income for many Palestinian communities, damage to even a single olive tree is a catastrophe. Actions like this seriously compromise Palestinians’ ability to earn a livelihood. Additionally, the olive tree is an important symbol of Palestinian culture and cutting them down sends a strong symbolic message of violence and cultural erasure. 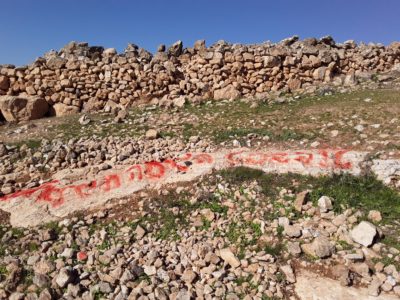 Graffiti written by settlers in the olive groves of at-Tuwani after an attack.

Despite all of what has been inflicted on them by the occupation, the residents of at-Tuwani have remained strong and united. We had the pleasure of walking over grazing land that had previously been controlled by the outpost. This land was returned to the community after persistent advocating and resistance by locals, who continued attempting to access the land in the face of settler and state violence. Seeing a shepherd and his children herding their animals, laughing and joking in the winter sunshine made it all clearer that resistance is necessary and effective against the occupation.