“They punish us in all the ways they can”

The last two weeks, 17 boys and men aged 16-25 have been arrested during night raids in the village of Kifl Hares. Since a week ago, the Israeli military have also closed off the main entrance to the village, which is located south west of Nablus in a hot spot next to the illegal settlement of Ariel. The villagers now have to go through the surrounding villages in order to get out, which leads to an increase of 20 minutes to their daily commute. 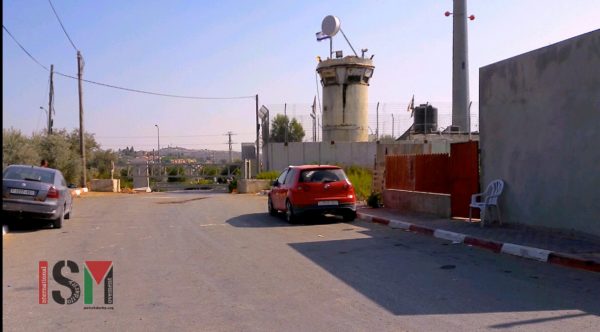 (The closed gate to Kifl Hares leading to the main road is guarded by Israeli military.)

Some  nights, the raids happened during some of the Jewish holidays. The settlers made a circle in the village square, dancing, guarded by soldiers placed on the roofs of the Palestinian homes around the square. ISM met the father of two of the young men who have been arrested. The home of the family has been raided six times in the last two weeks.

The first night raid, the father asked the soldiers what they were looking for, and after searching the entire house they replied: “We are just checking if you are OK.” The night raids have been following the main pattern of conduct: the military storms the village and closes it off, enters family homes, forces the families to get up where they then lock them in one room, whilst they destroy the family’s belongings in their search.

The second raid, the Israeli forces woke the village and the family up at 2 am to give them a document with a call for a court hearing. The third time,  the Israeli soldiers forced two of the sons to the Ariel police station, detained them there for two hours, and then released them. The fourth raid,  the military searched the house violently again. The fifth time they arrested a 19 year old son and the sixth time, the 22-year old son. The sons endured days of questioning, and after a rubber stamp in Salem court, they were then taken to Meggido, awaiting another trial in Salem court. The family only managed to see their sons briefly in the court hearing. In 2013 their older son was also kept in military detention for 16 months.

He told us his wife started screaming when the soldiers entered her bedroom, and the military then questioned why she was screaming. When the father emphasised the horror of the situation,the soldier said: “I have the right to do what I want. If you protest I will have your house demolished.” The soldiers also pulled their 85-year old grandmother up from her mattress in order to check her room.

Several families in Kifl Hares have suffered from similar horrific experiences during the last two weeks. Several villages around the occupied West Bank have also been raided during the night, and the villagers have seen their sons and neighbours being arrested by the Israeli forces. What are these Palestinians being punished for? The father answered: “For being Palestinian.”