Israeli settlers on 12th March 2017 harassed and threatened Palestinians and attempted to break into Shuhada Street kindergarten, as the Tel Rumeida neighborhood in occupied al-Khalil (Hebron) was put under curfew for Palestinians so that settlers could celebrate Purim undisturbed by Palestinian presence.

As on every festive occasion celebrated at the illegal settlements in here, Palestinians had to expect even greater restrictions than usual on their freedom of movement and their human rights (almost non-existent even on ordinary days). 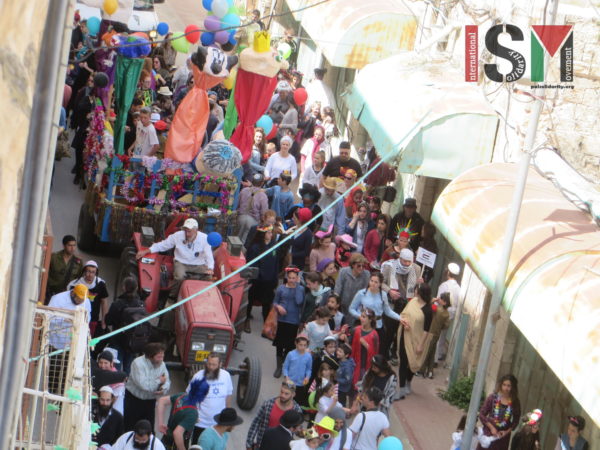 Hundreds of settlers marched from the illegal Tel Rumeida settlement towards Ibrahimi Mosque on Shuhada Street, while  Israeli forces ensured that settlers did not have to see so much as a single local Palestinian resident on their way. Qurtuba school and Shuhada Street kindergarten were unable to sent their students home, as soldiers denied them passage and the street they need to walk down was completely blocked by settlers, who have a history of harassing and attacking Palestinian children here. Israeli forces also invaded a Palestinian family roof on Shuhada Street in order to watch the procession of costumed settlers. 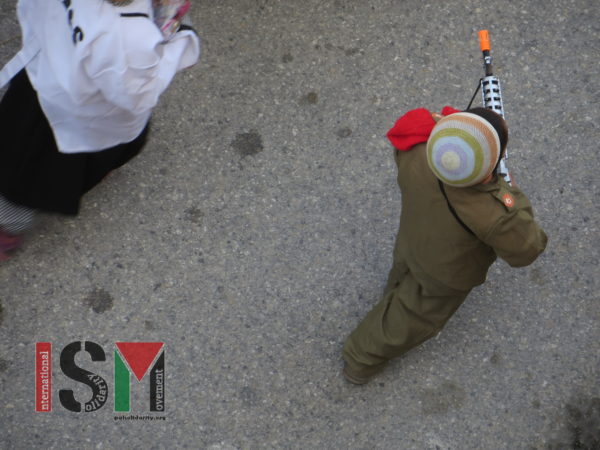 Colonial settler child dressed up as a occupying soldier

A group of settlers, including infamous and violent Ofer Yohana (עופר אוחנה), appeared at the kindergarten door and tried to break in, while children were still playing inside.  At this commotion the kindergarten children came outside only to see settler children trying to climb the fence that is supposed to protect the kindergarten. At the same time, settler adults started banging on the kindergarten door and trying to open it, insulting and yelling at the Palestinians inside. Instead of stopping this attack, Israeli forces attempted to prevent Palestinians and internationals from filming the incident. Only after more than an hour of idly watching the settlers harass, insult and verbally abuse the Palestinians (see a video, video credit: Human Rights Defenders) and attempt to break into the kindergarten, did Israeli forces present at the scene finally ensure that the settlers moved away to allow the children get home. 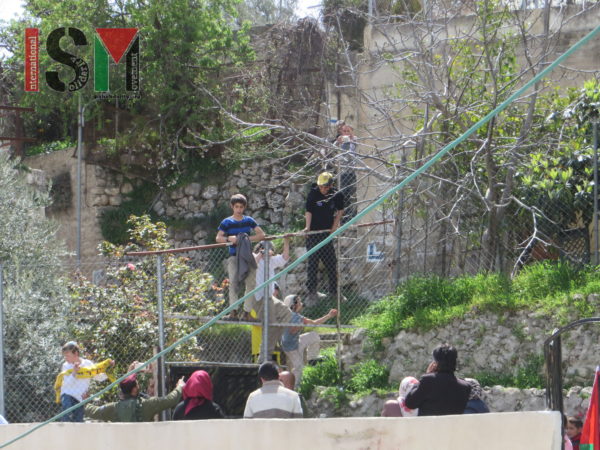