On  January 12th, 2017, Shuhada checkpoint in occupied al-Khalil (Hebron) stayed closed for over half an hour, while–as it appears–soldiers were sleeping. In the meantime, long queues of Palestinians trying to reach their homes formed outside the closed checkpoint.

The Shuhada checkpoint connects the H1-area, supposedly under full Palestinian control, with the H2-area, under full Israeli military control. It leads straight onto the tiny strip of Shuhada Street that has not (yet) been ethnically cleansed of Palestinian presence. For the majority of Palestinian families living in the Tel Rumeida neighborhood, this checkpoint is the only way to reach their homes. On Thursday morning however, the checkpoint remained closed. The soldiers ignored all requests to open the gates, and the two available bells at the checkpoint were switched off. Palestinians leaving the area through a turnstile at the checkpoint repeatedly confirmed that there were no soldiers to be seen inside the checkpoint.

In the meantime, many Palestinians gathered outside the locked checkpoint-gate, waiting to reach their homes. Amongst them were many school-children that had just received their certificates for the end of the school-year. 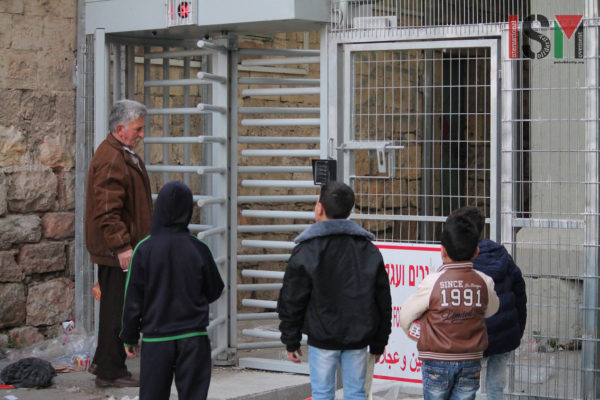 After more than 30 minutes, soldiers finally unlocked the turnstile allowing the people waiting to enter one by one. When passing through the checkpoint, behind the bullet-prof-glass, one soldier could clearly be seen lying on the ground with his backpack as a pillow, fast asleep. The other soldier, with his eyes barely open, waved people through.