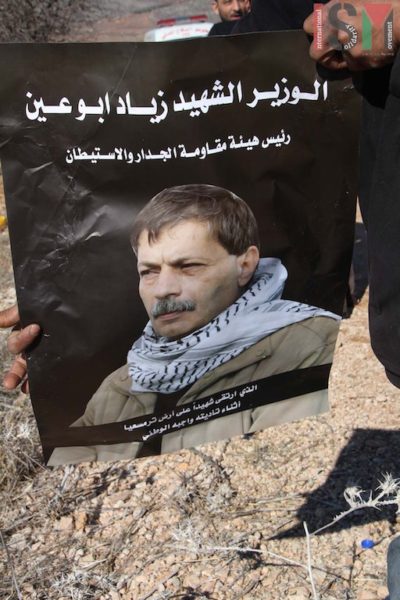 On December 9th,2016, hundreds of people gathered in the small village of Turmas Ayya, north of Ramallah, to commemorate the death of Ziad Abu Ein, a high profile Palestinian politician, Minister and Fatah leader, who died after inhaling tear gas and being violently beaten by Israeli Forces on Dec 10th, 2014.  This event also marked the third year of demonstrations against the uprooting of hundreds of trees by Israeli settlers and the confiscation of land by Israel in Turmas Ayya. The Commission Against the Wall and the Settlements organized this event together with the Abu Ein family. Representatives of political parties as well as dozens of internationals also participated in the tree planting, and reclaiming the land, which followed the midday prayer. 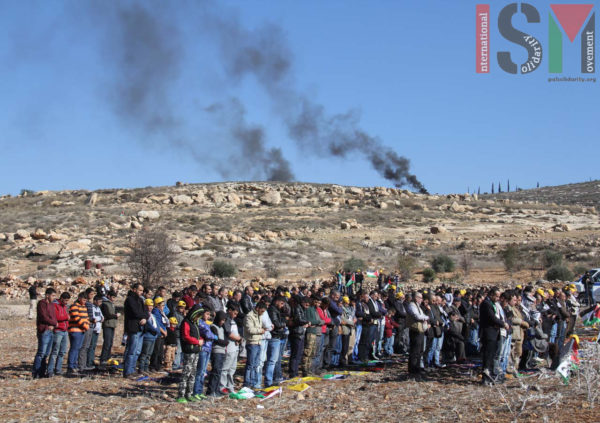 Men praying in the land nearby the village of Turmas Ayya. Olive trees waiting to be planted.

Not long after the prayer, while people were planting trees, Israeli Forces arrived and started shooting tear gas from up on the hill. The peaceful and non-violent event was once again interrupted by the excessive and brutal use of force by Israeli soldiers.  Once again, tree planting turned into tear gas. 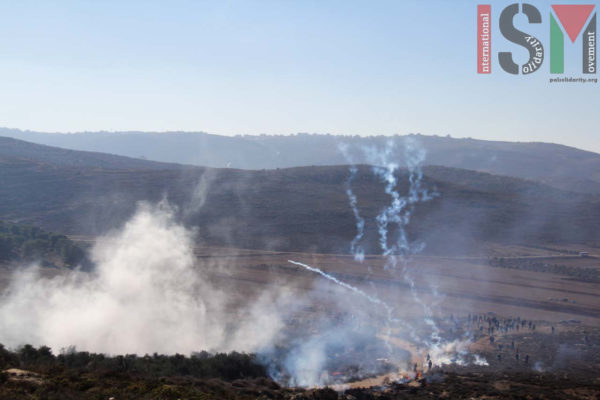 Tear gas thrown to the crowd

The land of Turmus Ayya is divided by Area B and Area C. The tree planting took part on Area B land, and just above the event in Area C, dozens of “shabab” (teenagers and young Palestinian men) were making small fires while carrying Palestinian flags and protesting against the Israeli occupation force. Within minutes, two jeeps and several armed soldiers appeared. Thus began a stand off where stones were thrown, and tear gas followed beginning with one canister at a time. 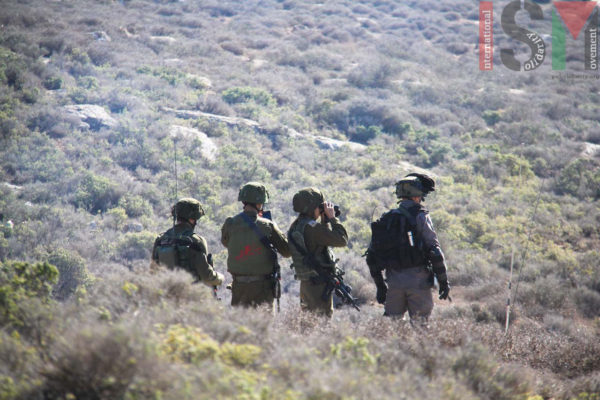 Stand off. Israeli Occupation Forces observing the crowd and the shabab movement.

As the clash continued to stir, more and fast rounds of the gas erupted into the air. The “shabab” starter running downhill and soldiers began to race down chasing the group. 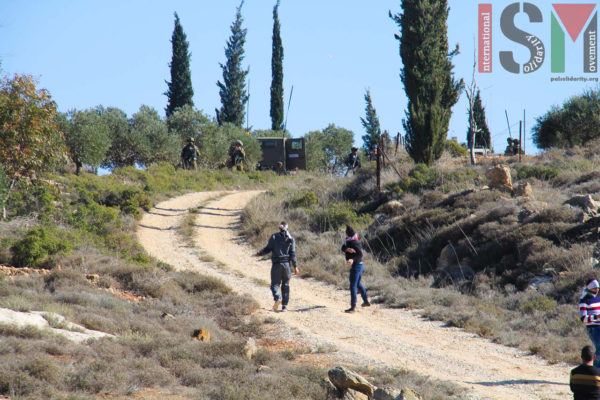 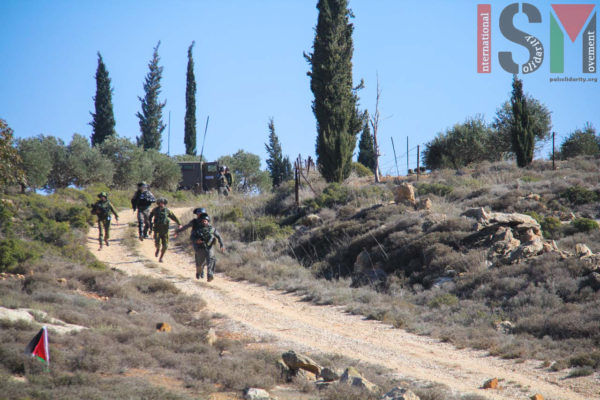 Israeli Occupation Forces chasing down the hill the Palestinian “shabab”.

Two soldiers managed to catch a fourteen-year-old boy. They pinned him to the ground, punched him while holding down his body, and then picked him up and dragged him back up the hill towards the jeep. 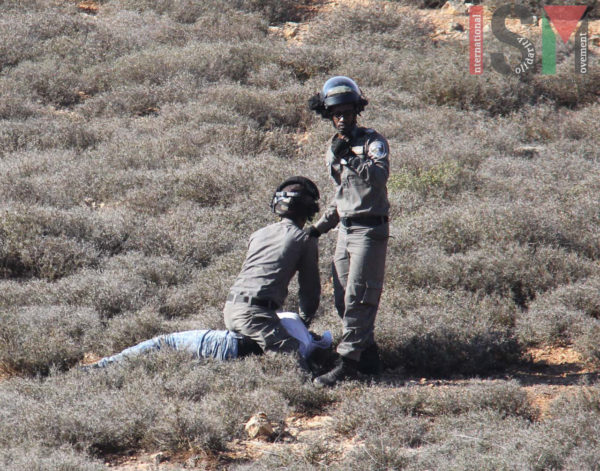 A fourteen-year-old boy being pinned down by Israeli Forces. 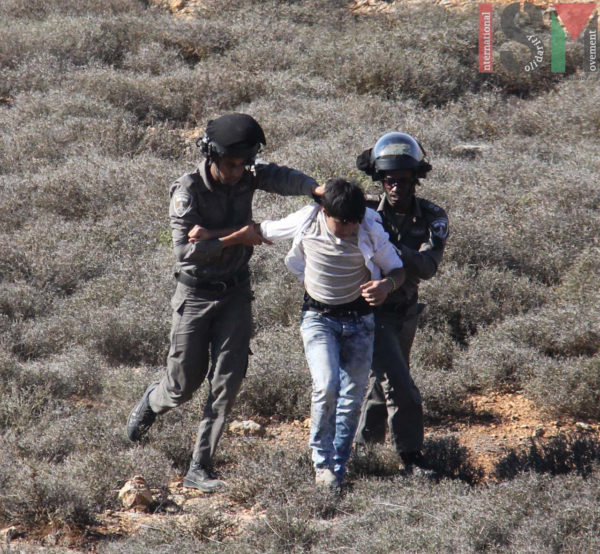 The teenager being arrested and dragged up the hill.

At that point, there were about twenty-five soldiers spread out along the hillside, and a still tension awaiting the next move. Some of the young boys came close to the soldiers and a few more tear gas canisters were thrown up. Eventually negotiations began with leaders of the demonstrations and members of the Turmus Ayya village.  They told the Israeli Forces that they will not leave until they release the boy.  Hours later, he was indeed released; a positive moment in the constant battle for the Palestinian’s basic rights.

This day of remembering Ziad Abu Ein, whose life was taken for the resistance struggle, is the reality that people are still fighting, still standing up for the rights to their land and to a free Palestine. 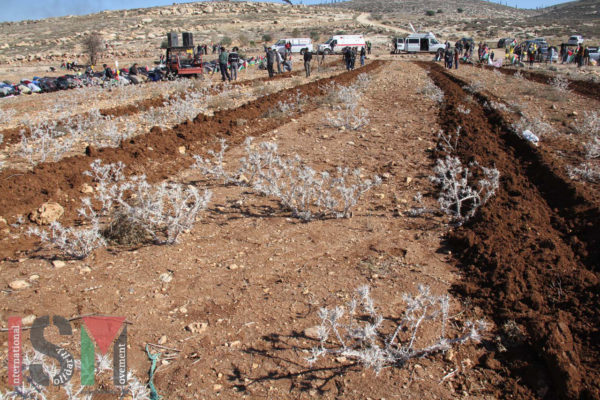 People disperse after the confrontation and leave behind newly planted olive trees.