On November 15th, the Bedouin community of Umm Al Khair experienced the fifth wave of demolitions by Israeli forces on their structures to take place in the past year. The most prominent of the two structures demolished on Tuesday was their community center, which was also the space used for their Kindergarten classes.
The demolitions took place one day after the community saw a drone operated by Extremist Settler organization Regavim, fly over-head documenting any signs of construction or new buildings. The community center was one of these new structures, due to being demolished and rebuilt most previously in August of 2016. Regavim’s tag line is Ensuring the responsible, legal and environmentally-friendly use of Israel’s national lands. 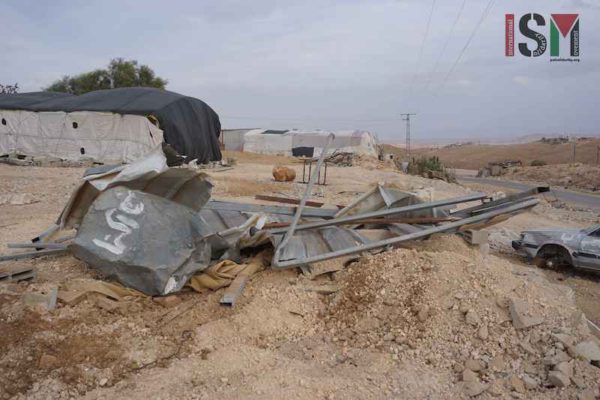 While it was the Israeli army and the Civil Administration that came in to bulldoze the structures, Zionists from Regavim were present within the neighboring illegal settlement of Carmel. From there they operated the drone and followed over-head those from the Israeli state there to demolish the structures. Historically, the army has come to demolish their structures very quickly after the Regavim drone comes to take photos.

Om Salem, a resident of Umm Al Khair said, “We just need these demolitions to stop. We are sick and tired of it”. Om Salem’s own home was demolished last August. After she lost her home, organizations provided her with a small shelter which she has been living in. But on Tuesday, the army took photos of it and she fears they will come to demolish it again.

In the end however, it is the children and youth of the camp that are most impacted by these demolitions. In this community of 150 people, most are children and youth. The community center was a pivotal space for young people. It was used in the mornings as the school for kindergarten students, and in the afternoons to provide IT and computer trainings, after school homework help, English language classes, and for adults it was used as a space for community meetings.

Umm Al Khair has the deed to the land which makes it difficult for the Israeli government to kick them out entirely. Instead the government in collaboration with Regavim, uses tactics such as these demolitions to make life unbearable. Despite the attempt for the State to force displacement, the community stays strong. Almost everyone returns to Umm Al Khair, including many youth who have left to attain college degrees. They remain resilient against Zionist attempts to displace them.

The community of Umm Al Khair was established in 1952 on land the villagers purchased. All 150 residents are documented refugees from 28 families. Most are goat herders and farmers. They came to settle on the land they purchased after they were displaced from Arad Dessert in 1948. The illegal settlement of Carmel bordering them, and which was established in 1982, is built on land purchased by Umm Al Khair residents. 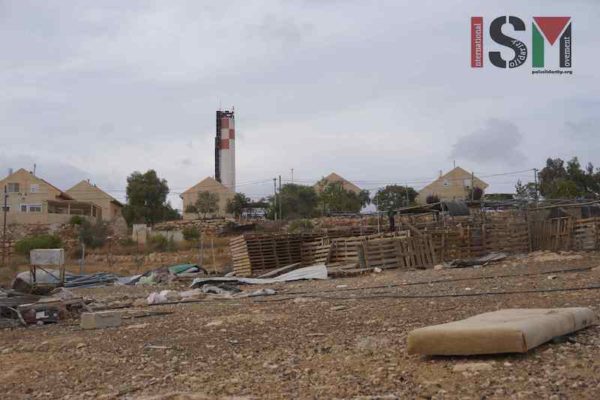 Village structures with settlement in the background