New
Home / Hebron / The Weight of Each Stone

The Weight of Each Stone

For generations, stones have played a significant role in both Palestinian society and within resistance movements. For this reason, it should be no surprise that the Israeli state has historically targeted the use of stones in a variety of ways, and continues to today.

The significance of stones within the Palestinian context is deeply-rooted. For centuries stones and boulders have been used across Palestine in agricultural lands to give structure and strength to the soil holding the olive and fruit trees that feed and sustain Palestinian society. Homes in many areas of Palestine are also built from these materials which are of the earth, of the land that is so sought after by imperialist powers. The connection between physical home, and homeland is grounded partially in the stones of the earth.

Within Palestinian resistance movements, stones have played a crucial role. They are often used to barricade roads from Israeli military jeeps entering Palestinian areas. In the first Intifada, masses of Palestinians took to the streets to fight the Israeli occupation and colonial forces using the only ‘weapon’ available to them: stones. Perhaps one of the most iconic photos from the first intifada was that of a young boy throwing a stone at a monstrous military jeep with precision and purpose. These practices extended through the Second Intifada and into today, as we continue to see children and youth fighting for their communities against Israeli colonial and violent practices, with stones. 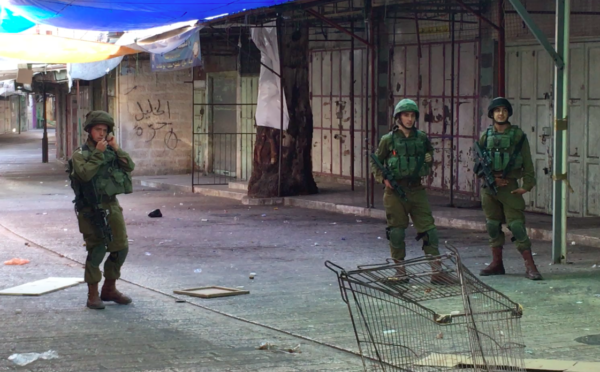 Last Friday in Al Khalil, seven Israeli soldiers came through the Palestinian market roads; a nearly daily practice and demonstration of Israeli entitlement. It seems to have become normalized in many ways as a part of living under Israeli occupation. But some days, like this past Friday, it is met with a statement of strength that reflects a history of Palestinian liberation movements. A handful of Palestinian children from ages eight to ten, defended their streets with stones in hand. The soldiers, suited up in helmets and military gear including their ever present M-16s, seemed to laugh at the front the young boys held. But in the end, the soldiers left. These few boys, with so much righteous anger and frustration, held their ground, and fought for their community in a small, but powerful show of resistance.

One day prior to this in Beit Ummar, a village in northern Al Khalil, yet another Palestinian youth, Khalid Bahr Ahmad Bahr, 15, was shot and killed by Israeli forces for alleged rock throwing. According to Ma’an News, Bahr became the 235th Palestinian to be killed by Israeli soldiers and settlers since a wave of violence spread across the occupied Palestinian territory and Israel in October 2015.

The sobering number of Palestinians killed are what you might expect when you look at the policies supported by the Israeli parliament, such as the shoot-to-kill measure introduced in September of 2015, legally allowing the use of live-fire against Palestinian protestors. This tactic has been common practice, but like so many other unconscionable Israeli policies, has now been ushered into legal practice under the occupying state. This measure has been used by the Israeli government continuously over the past year as a rationalization for the unjustifiable killings taking place in large numbers, including against youth who participate in throwing stones.

These intentions are further echoed in the policies around arrests and imprisonment for stone throwing. Palestinians can be imprisoned for up to twenty years if charged with throwing stones with intent to harm. The testimony of one soldier is all that the Israeli court often deem necessary to charge and sentence Palestinians for throwing stones, whether or not this actually took place, and with no regards to if anyone was harmed in the process. The absurdity of a sentence such as this is not only used as a tactic to imprison thousands of Palestinians, often children and youth, but is targeting the symbolism of resistance that continues to drive Palestinians fighting for freedom, fighting for liberation, and fighting for their homeland.

Each stone thrown today, holds the significance and weight of each thrown before it. As Israeli colonialism continues to spread, the stones of the earth continue to build a foundation for Palestinian resistance to stand on. They have acted as this from the beginning of the occupation and will continue to for as long as the oppressive policies of the Israeli state persist.