Today, international activists joined members of the Najjar family from the village of Burin to harvest their olives and provide a protective presence should settler colonists or Israeli forces attempt to attack and disrupt the harvesting. Thankfully, there were no violent incidents todayand the international activists enjoyed a beautiful day harvesting olives with the wonderful and hospitable Najjar family.

The Najjar family’s land is adjacent to the illegal Israeli settlement Yitzar. This year, the family was issued a permit to access their land for only three days to harvest their olives. The permits required by Israel for Palestinian farmers to access their own land are also typically restricted to limited times each day. According to the family, three days is not nearly enough time to harvest their whole crop. As a result, international activists have been harvesting olives together with the farmers without permits which brings the risk of retaliation by both settler colonists and Israeli forces. It has been reported that settler colonists often harvest Palestinian’s olives for themselves without any repercussion. The Najjar family reported that this year they counted four of their trees stripped of their olives before they had the opportunity to access their land themselves.

All of these restrictions together with the settler colonist violence serve to further the theft of Palestinian land. Often, farmers are only given permission to access their land during harvest time and not throughout the year so as to maintain their corps and ensure a good harvest. One member of the family told us, “last year my father came to clear the land, but they kicked him out.” 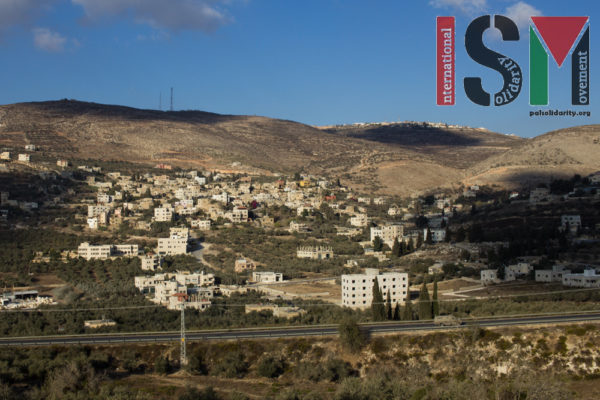 The city of Burin, with the illegal Israeli settlement of Bracha that lies atop the hill to the upper right.

The village of Burin is trapped between Yitzar and Bracha illegal settlements and has endured settler colonist violence and the destruction of their olive trees for years. As is the case for villages across the occupied West Bank, the farmers in Burin depend economically on the olive harvest to provide annual income for their families. “Its so important because there is no work. All the people wait for the olive harvest to come because the only work available is to sell olive oil. They live for justice and oil.”