Israeli forces in occupied al-Khalil (Hebron) are increasing their efforts to slowly annex even more of the tiny part of Shuhada Street where Palestinians are still allowed to walk.

The majority of Shuhada Street, once the main Palestinian market and connection between the south and north of the city, has been ethnically cleansed of Palestinians after the Ibrahimi Mosque massacre in 1994. More than 1800 shops on Shuhada Street were forced closed and their doors welded shut, and more than 600 families were forcibly displaced by the occupation army, creating a ‘sterile zone’ free of Palestinians, who’s mere presence in this area has been ruled illegal by the occupation. Out of the four settlements in the heart of the Old City of al-Khalil, three are located on Shuhada Street, and one is nearby in Tel Rumeida, conveniently connected with a road only settlers are allowed to drive on. This road extends further in the opposite direction all the way to the biggest illegal settlement on the outskirts of al-Khalil, Kiryat Arba.

The only few hundred meter of Shuhada Street, located between Shuhada and Daboya checkpoint, that are still accessible to Palestinian pedestrians, since October 2015 has been declared a ‘closed military zone’, covering the whole Tel Rumeida neighborhood; thus limiting the number of Palestinians able to use this street to registered – that is numbered – residents. Near Daboya checkpoint, which marks the ‘end’ of Shuhada Street for Palestinian residents, the spot where they’re not allowed to pass any further by the discriminatory legal system of the Israeli occupation based on racial discrimination, used to be the spot to reach Qurtuba school and the surrounding neighborhood – before these stairs have been permanently closed. Again, this closure is based on racial discrimination and only affects Palestinians, whereas settlers are free to use the stairs without any hassle. This closure effectively turned the small strip of Shuhada Street into a dead-end for Palestinians, as the rest of the Street is a no-go zone for Palestinians, and the only other option, the stairs, included in the ethnically cleansed area ‘free’ of Palestinians.

Sunday night, after Israeli forces gunned down 4 Palestinians in occupied al-Khalil in just two days, killing 3; the end of Shuhada Street leading into the ethnically cleansed part was marked with white lines, indicating a new limit for Palestinians till where they’re allowed to walk. Immediately after passing the first line – which is placed about 20 meteres from the checkpoint – Israeli forces will approach any Palestinian for the usual checks and humiliation all too common at checkpoints. The line was placed just few meters in front of the entrance to the house closest to Daboya checkpoint still inhabitet by Palestinians. Effectively, this means that whenever coming home, the residents are forced to cross this line, resulting in soldiers approaching them expecting them to try to pass further down the street. A second smaller line is marked with the Arabic word for ‘stop’, clearly illustrating that this command is deliberately only intended to affect the Palestinians. Therefore, the part of the street past the first line towards the ethnically cleansed part of the street has now become part of the ever-more expanding ‘sterile’ no-go zone for Palestinians. 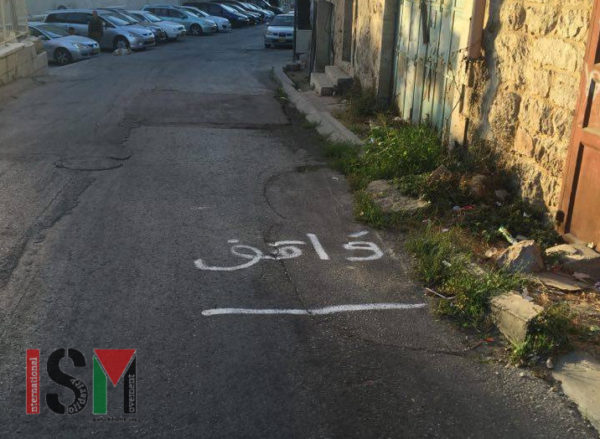 Marking indicating in Arabic for Palestinians to stop. Shuhada Street.

The continuous annexation-efforts of the Israeli forces thus are going slowly, but steady, and so far have gone unnoticed by the media and the international community. With the closure of the Qurtuba stairs, the implementation of the closed military zone, and the now new restrictions though, the maze of areas effectively ethnically cleansed of Palestinian residents are increasing steadily, exacerbating the already almost impossible to navigate maze of checkpoints, restrictions, no-go zones, areas and arbitrarily declared closures, curfews, denials of passage and constant threat of injury or even death. All solely based on one distinct feature – being born Palestinian.