Palestinian man beaten up by Israeli forces near Ibrahimi Mosque

Israeli forces on 3rd July beat up a Palestinian man at Ibrahimi Mosque in occupied al-Khalil (Hebron), leaving him with a bleeding nose.

A border police-men grabbed the man by the neck, after he was trying to leave the area. He then, with his hand firmly gripped on the man’s neck, walked him towards the mosque entrance, deliberately pushing him into a police-barrier, that immediately fell, almost causing the man to stumble and trip over the barrier, which was only stopped by the firm grip of the border police men on his neck. He was deliberately taken out of sight into a room where just two days before, 27-year old Sarah Tarayra was gunned down by Israeli forces while, according to eye-witness statements, she kept affirming that the only thing she has is her mobile.

These kind of rooms, where any observer is prevented from seeing and documenting the events exist at each checkpoint in al-Khalil, and with recent ‘upgrades’ and ‘renovations’ of checkpoints, most checkpoints are now constructed in a way, where anyone being ‘checked’ is inside a box with only the soldiers and no observers. This way, Israeli forces try to further hide and stop any documentation of their crimes.

The Palestinian man was then hit hard in the face by the soldier, immediately causing his nose to start bleeding. Despite trying to hide this unprovoked violence, the man went into the room fine, and clearly came out shaken up and with a bleeding nose. When trying to leave after this vicious attack, he was called back by another border police men that then detained him for an ID-check and photographed his ID. The man had to go to hospital the same night, but luckily his nose was not broken. Still, even the next day, it was swollen, bruised and showed signs of the attack. 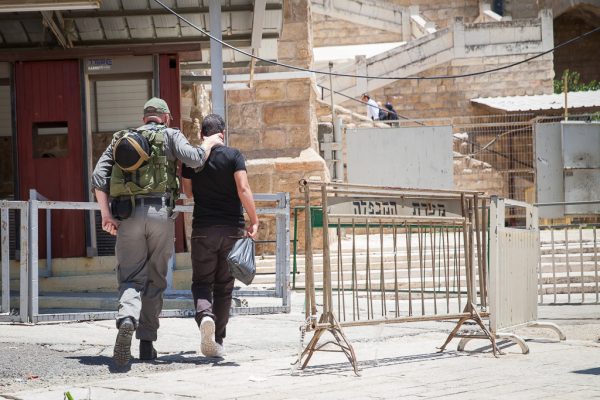 As Palestinians in occupied Palestine are subjected to the Israeli military law, they lack any way of addressing attacks on them by the Israeli forces. With the attack being carried out by a border police commander, the highly militarized police of the Israeli forces, any complaint to the civil police would most likely be futile – and instead put any Palestinian at risk of instead being arrested for an accusation by the attacker. A Palestinian’s word or statement, in an Israeli police station, against any member of the Israeli army or police counts for nothing. In the past, the Israeli police at times has even refused to take any complaints by Palestinians against settlers. Israeli forces, as well as settlers, thus have complete impunity in their actions, and as this vicious attack illustrates, even enjoy the support or at least tacit consent of their colleagues.