New
Home / Features / Al-Nakba day: The biggest crisis in the history of Palestine

Al-Nakba day: The biggest crisis in the history of Palestine

Today, 68 years ago, the state of Israel was created on the Palestinian peoples’ home. The anniversary falls after a winter and spring with an escalation in violence and arrests of Palestinians, ever-expanding Israeli settlements in the West Bank and the Palestinian capital of Jerusalem, as the de facto take over by Israel of settlements in and around the city. It is estimated that there are approximately 600,000 Israeli settlers living in the West Bank, including Jerusalem.

For the Palestinians it is remembered as Yawm an-Nakba, meaning “Day of the Catastrophe” or just Nakba Day. During the 1948 Palestine War, an estimated 700,000 Palestinians fled or were Expelled, and Hundreds of Palestinian towns and villages were depopulated and destroyed. These refugees and their descendants number several million people today, divided between Jordan (2 million), Lebanon (427,057), Syria (477,700), the West Bank (788,108) and the Gaza Strip (1.1 million), with at least another quarter of a million internally displaced Palestinians in Israel and many more around the world. Later, a series of laws passed by the first Israeli government prevented them from returning to their homes, or claiming their property. They, along withmany of their descendants remain refugees. The expulsion of the Palestinians has since been described by some historians as ethnic cleansing. 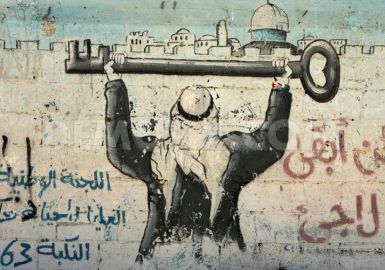 Many dispossessed Palestinians continue to hold and treasure the keys to their lost homes, and the key has become a symbol of Palestinian right to return home. United Nations Resolution 194, passed immediately following the Nakba, declares the right of all refugees displaced and dispossessed by the Zionist militias to return to their homes. Almost a million had registered with the UN by 1950, and today there are over 4 million with UN-registered claims against Israel. Compliance with 194 was one of the conditions for Israel’s admission to the UN, to which they agreed but which they have never honored. This right is enshrined in the Universal Declaration of Human Rights to which all UN member states are obliged to conform, and following 194 has been re-confirmed by many subsequent UN resolutions. It remains an international demand upon Israel. But Israel has refused to consider this right throughout the various iterations of the “peace process” since the Palestinian refugees return would jeopardize their Jewish majority. So we can only hope that justice will prevail for the Palestinian people.