The Yes Theatre in Al-Khalil works with dedication, for a brighter future for the Palestinians in the occupied West Bank through a diverse set of cultural activities. Roughly eight new productions every year reach an audience of over thirty thousand Palestinians, and on occasion also tour theatres of Germany, France and Tunisia. Additionally, the Yes Theatre continually searches for new ways to share and develop its decade-long artistic practice, by engaging in dialogue with its local community, sharing their stories, hosting workshops, providing youth education, and internships with a job-guarantee. Their projects include Yes 4 Future, Yes 4 Kids, workshops that support women speaking in front of an audience, along with several plays that include female actors – something which is not a standard feature in Palestinian theatre.

ISM had a chat with general manager Mohammad Issa, and some of the artists, after having watched the powerful performance “3 in 1”, written collectively by Ihab Zahdeh, Raed Shiokhi and Muhamed Titi. The different stories of the play were inspired by meetings with the local citizens of Hebron, and depicts the everyday challenges of what Raed Shiokhi (actor) describes as the circles of life for Palestinians.

“We like to say all the time that we live inside circles. We have the circle of the family, and then the circle of society. Then the circle of our government and the circle of occupation at the end. So occupation includes everything. So you go smaller and smaller and start with the family. They teach you what to do, and what not to do. Then the society, what is right, what is shameful and what is not. Then the government and the people in power who essentially are in full control, the governor, the mayor, and the religious leaders, who on several occasions in the mosques have mentioned and criticised our work. They corrupt our children and prohibit our cultural development. If we were to listen to their advice, we would have stopped a long time ago. Again and again we come to a point where it appears impossible to continue, but we remind each other of the message we have. As artists we feel stuck in between two fires. The fire of continuing your work of curiosity as an artist, and the fire of society trying to push you back.” 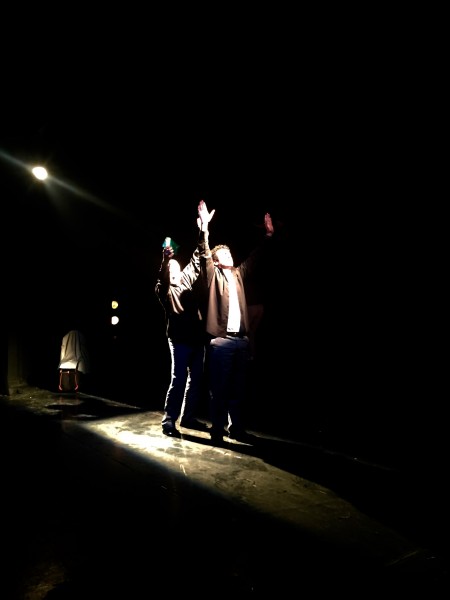 Artists of Yes Theatre in performance

The autobiographical struggle of the 3 artists in the play clearly resonates directly with the personal struggles of the audience, and the different scenarios and situations repeatedly spread overwhelming waves of laughter and uncontrollable giggles. Seeing a Palestinian smile or laugh is a surprisingly common sight, given the extremity of their situation, but this collective release of emotions seemed to connect the spectators in a deep and intimate manner. The Yes Theatre is profoundly interested in this shared space, in which cultural resistance occurs. General manager Mohammad Issa says that for them the resistance will not succeed through the use of physical force or politics, but through intellect, culture and the empowerment of women and the young generation. Sustainability and competence development are key words that go hand in hand as the Yes Theatre engages in social activities, and training programs that employs thirty graduates per year.

The Yes Theatre finds alternative ways of resisting the occupation, but you also protest against internal restraints of Palestine such as gender inequality, socio-hierarchical imbalances and even restraints of religion. Do you envision what future Palestine could look like, or is dialogue the main objective?

“I totally agree that we are resisting, in our own way. We can’t throw the Israelis out of Palestine. This is the reality. They have to live with us, we have to live with them. What the political formula will be, whether we are talking about two states or one state, this is something that could maybe be solved later on, or maybe this dilemma is something that lies in the hands of the young generation. This is part of our national struggle, but at Yes Theatre we don’t have a vision for that, we don’t wish to impose anything. What we get from the local community is the material, and this material is brought back to the community in a creative manner. And the discussions we have around the material, in its context, must also be circulated in the community. We look for input and feedback from different focus groups, even in more traditional productions like “Ali Baba” (currently in production at Yes Theatre). I have my own views on gender equality, but the locals might have its own ways, and we need to take that seriously. That doesn’t mean that we should not advocate, or raise awareness, but we need to reflect the status quo, in order to talk about it, and find the precise questions, which are not ours – they are the questions of the local community.” 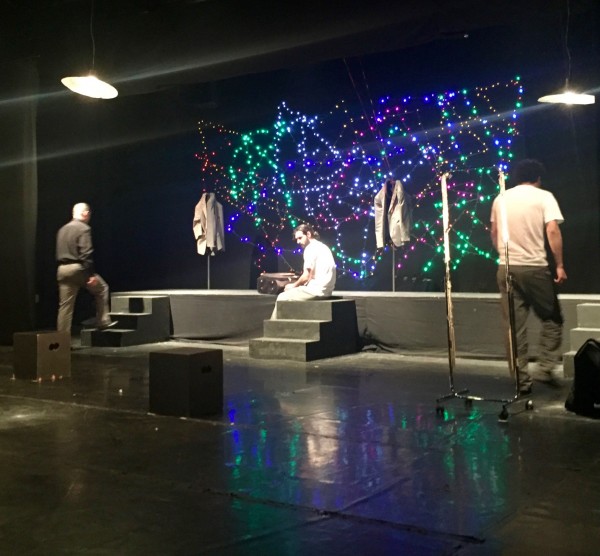 Still from the award winning performance “3 in 1”

The artistic efforts that Muhammad Issa describes offer a space for its Palestinian audience, in which everyday terrors can be processed without fear. What might be referred to as “cultural resistance” has an essential significance for the Hebronites, as the daily struggle of facing the occupation, passing checkpoints, being searched, questioned, tear gassed or even shot, continues and worsens. Only in the last 10 days 3 youngsters have been shot dead in Hebron, withheld from medical attention, one of which was brutally executed by a soldier of the Israeli Forces, as has been seen in a viral video recorded Thursday the 24th of March. It might seem near impossible to imagine how Palestinians could truly resist or even end the occupation. The situation that they face daily is not only humiliating and dehumanising, it’s paralysing. Searching for education and togetherness through cultural meetings, if nothing else, might offer an opportunity for unity and common understanding. The Yes Theatre raises a question: How do the people imagine Palestine would look when, or if, occupation somehow, someday ends?