On Saturday 3rd of April 2016 settlers entered land belonging to Muhammad Abu Haikal in the Tel Rumeida area of Hebron on the occupied West Bank in Palestine. The settler children built a tent and then brought other settlers who prayed and ate there. It took more than four hours from when the police arrived until the settlers actually left, still claiming that it was their land and running around so that the police would not be able to evict them.

The first young settler kids arrived at the land at around 9 o’clock in the morning and started building a tent out of wood and sheets that they had found and playing on the land. They were actually playing in Muhammad Abu Haikal’s garden, but the end of the garden has been declared a closed military area by the Israeli Occupation Forces, who have made a military outpost in the garden and cut off the end of it of with barbed wire. The settler children entered the garden using the staircase that has been built for the soldiers to reach the outpost: they stamped down the barbed wire and covered it with a piece of wood to prevent themselves from getting injured. 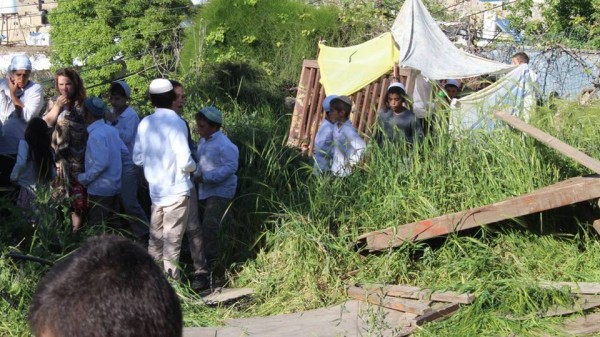 Settlers and their children trespassing illegally on Palestinian land.

Later on, while the family was trying to pick almonds from trees in the part of the garden that is not a closed military Area, the settler children returned with a number of  adult settlers and more children. Muhammed Abu Haikal and the internationals present asked the settlers to leave the land, but they refused.  He then contacted the police.

After the police arrived, the settlers once again claimed to be the owners of the land, with the right to remain there. The Palestinian family was asked to step back and had to stop harvesting their garden. Not until after the settlers had prayed on the land multiple times, brought food and played ball there, did the  police finally try to get them to leave. The police asked all Palestinians and internationals to leave as well, as they said, “it is impossible to make Israelis leave, if there are Palestinians on the land”. It then took the police over two hours to evict the settlers. They then removed the materials that the children had left on the part of the land that is not a closed military area, but refused to pull down the tent, because, they said,  it was not allowed on Shabbat.

Finally the soldiers closed off the closed military area with more barbed wire and allowed the family back into their garden. If Palestinians had been trespassing on settlers land, which is illegally occupied, they would probably have been arrested immediately, but when it is the other way around, which it usually is, the police do not use any kind of force.