In the morning, three heavily-armed soldiers in full combat gear entered the premises of the school when the girls were still going to their classes. Al-Faihaa girls school is located near Ibrahimi mosque, on a road that connects Shuhada Street, which Palestinians are completely banned from using, with the biggest illegal settlement on the outskirts of al-Khalil, Kiryat Arba. Only settlers are allowed to drive on that road, while Palestinians are banned from driving any kind of cars, including ambulances, there, and often face harassment and violence from settlers.

The soldiers entered the girls school and locked themselves in the directors room with the director, the caretaker and another female teacher, preventing them from leaving the room. They then proceeded to go through the video camera footage of the girls school, accusing them of allowing Abdullah …….., a Palestinian gunned down at the nearby Queitun checkpoint the day before, pass through the school premises. As the girls school has repeatedly been threatened by Israeli forces that their main gate will be permanently shut if people other than teachers and students use it, the gate is now always locked shut except for when students are passing through for school. 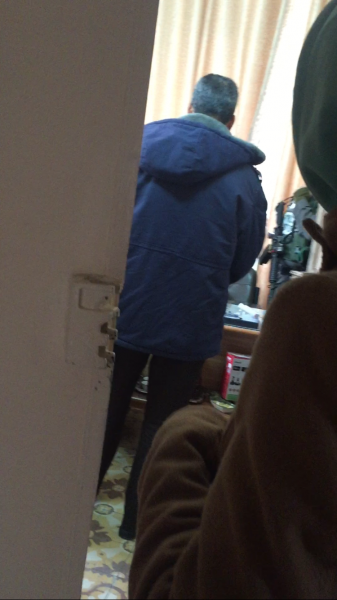 Israeli forces kept the director, a teacher and the caretaker hostage in the director’s room, preventing them from leaving the room and anyone else from entering for about an hour. They then left the school while the other teachers were trying to make sure that the girls stayed in their class-rooms in order not to scare them any more due to the presence of the soldiers.

The right to education in al-Khalil is often trampled on by Israeli forces, that routinely raid schools, detain, search or even arrest students at checkpoints, or shoot tear gas at them.