31st December 2015| International Solidarity Movement, Nablus Team | Jordan Valley, Occupied Palestine
During the past 6 months, the Jordan Valley Solidarity Campaign has registered further land grabbing in Fasayal village in the Jordan Valley. The land, which originally belonged to a Palestinian owner, was invaded 6 months ago by Israeli authorities accompanied by settlers from nearby illegal Israeli settlements and bulldozers. Locals say that they were seen working on the land in order to level the surface of the soil to prepare it for planting trees. Locals reported that on the 19th of December Israeli authorities with Israeli settlers were digging holes for trees; so far, 400-500 date trees have already been illegally planted on the ground. The land is located between two illegal Israeli settlements, Yafit and Masu’a, and furthermore borders with route 90, which has resulted in the denial of access for many Palestinian land owners to their land because of “security reasons.” 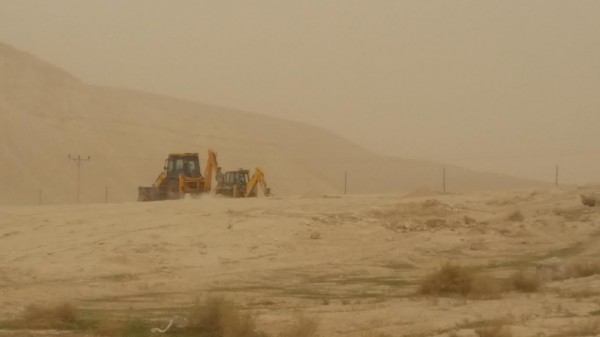 As 87% of the Jordan Valley is declared area C and an additional 7%, which is formally part of area B, is declared a nature reserve, most of the Jordan Valley is off limits for the Palestinian people. Furthermore, 50% of the area is controlled by the illegal Israeli settlements, and 45% is declared military bases, “closed military zones,” “nature reserves,” and “firing zones,” denying access for Palestinians and facilitating the demolitions of Bedouin tents, houses, wells etc. In area C obtaining permits to build schools, hospitals, water networks, roads or other basic service infrastructure is practically impossible, which violates the basic needs and human rights of the residing Palestinian population. Israeli forces destroy infrastructure and buildings built without a permit.

By oppressing the people in the Jordan Valley in this manner, Israeli occupation forces have succeeded in decreasing the Palestinian population from 320,000 in 1967 to approximately 55,000 people. In the same four decades, 37 illegal Israeli settlements have been established and are now housing 10,00 settlers, who enjoy a 75% discount on their water bills and cheap stolen land. In contrast, Palestinians suffer from extreme lack of access to water by having their water tanks confiscated and their wells demolished. Furthermore, the Israeli authorities prohibit Palestinians from digging new wells or reallocating old wells, forcing Palestinians to have wells only 150 meters deep where the water is either salty or nonexistent due to the construction of Jewish-only wells nearby. Israelis are allowed to dig 400-500 meter wells, sometimes hitting salt beds causing the water in the Palestinian wells to be salty.