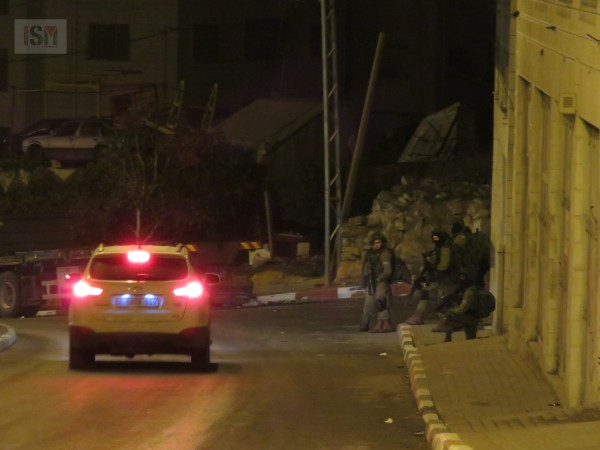 Palestinians living in the Israeli militarily occupied West Bank face discrimination, racism and humiliation at the hands of Israeli forces on an everyday basis. Humiliation is entrenched in every aspect of daily life under the Israeli occupation. The message is clear: as a Palestinian you are always perceived as a threat, a possible terrorist or a menace – but never as a human being.

As a Palestinian citizen of the West Bank, freedom of movement is severely restricted and rather resembles trying to navigate a maze of road-blocks, permanent checkpoints and temporary ‘flying checkpoints’ that can suddenly pop up anywhere. All of these restrictions share one commonality: they are clearly intended to target only Palestinians – while Israeli settlers from the illegal settlements in the occupied West Bank are using roads that might not even be allowed for Palestinians to drive on.

In occupied al-Khalil (Hebron), the Israeli bus collecting passengers from the illegal settlements is not allowed for Palestinians to ride on, and thus passes Bethlehem checkpoint on the way to Jerusalem without even stopping – all the passengers are Israeli settlers anyways. On the Palestinian bus going through the same checkpoint, everyone, with the exception of tourists and elderly, are forced to get off the bus and wait for their IDs to be checked outside in any weather, and often their bags inspected by heavily-armed soldiers. 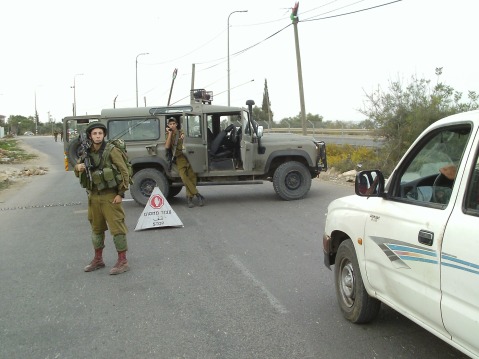 Israeli soldiers and the flying checkpoint outside the village

Right during rush hour on Thursday afternoon, Israeli forces set up checkpoints at all the entrances of occupied al-Khalil, resulting in endless queues of cars, on their way to visit family over the weekend on Friday and Saturday. As two soldiers thoroughly checked every passenger’s ID and car going in both directions, the queues grew longer and even ambulances with emergencies were denied passage and held up for at least ten minutes while being checked – ten minutes that hopefully weren’t critical for the emergency the ambulance was attempting to quickly get to. As Israeli forces strategically blocked every possible way to leave or enter al-Khalil either by permanent road-blocks completely blocking any sort of traffic except pedestrians or temporary checkpoints; there was no possible alternative than to either turn around and stay inside the city or to endure at least two hours of waiting to eventually be allowed to pass this checkpoint.

Finally passing one checkpoint successfully, though, in militarily occupied Palestine basically doesn’t mean anything: just a few hundred meters down the street might be another checkpoint. Palestinians try to avoid Gush Etzion junction on the way to Bethlehem, as settlers often attack Palestinians cars there, and soldiers stop and search cars with Palestinian license plates only; they take a detour through Palestinian villages. But in order to make the near-lockdown of al-Khalil ‘perfect’, Israeli forces set up checkpoints at entrances and exits of Sa’ir village. Thus, after an hour-long wait to leave al-Khalil city itself, Palestinian cars were stuck in yet another checkpoint just a twenty minutes drive away.

Waiting in the dark for seemingly endless hours to move ahead just one or two more meters in the line as a car was allowed to pass – or turned around, giving up the hope of ever crossing that night at all; Israeli settler cars speed past on a nearby road without any hurdles or hassles, just ‘normaly’ driving down a road at night. When finally slowly approaching the make-shift checkpoint with traffic spikes on the street, cars have to switch off their lights, so people next in line will only hazily see what’s going on. Once it’s their turn, everyone inside the car has to get out and stand a few meters away from the soldiers, while they inspect the IDs and cars. Depending on the soldiers mood, some people, mainly young adult males, will have to lift up their shirts and trouser-legs; while others will have to answer questions about their destinations and the reason of travels, and even about their families and private life. The only thing that is for sure is that you can never tell what will happen. The power dynamics is clear, the heavily armed soldiers have the ‘authority’ to decide over everything, the Palestinian passengers will have to obey whatever is asked of them. That none of this has to do with ‘security’ but everything with control and humiliation is obvious. This is the face of just a tiny little aspect of the everyday humiliation defining this military occupation.

Humiliation doesn’t even stop with death – the Israeli forces are still withholding the bodies of Palestinians they claim attacked Israeli soldiers – refusing an appropriate funeral and mourning for their families, relatives and friends. Denying even a last peaceful rest and a person’s family to mourn the death of a loved one is the last possible way to humiliate. Not even in death, does the humiliation stop or are Palestinians treated like human beings.