On Sunday, 1st November 2015, Israeli forces prevented movement of Palestinians in various areas in al-Khalil (Hebron) that have previously been declared a ‘closed military zone’. Violence against school-children and teachers has seen a sharp increase. International observers documenting and reporting on the every-day restrictions and crimes of the Israeli forces are increasingly targeted by the Israeli forces trying to silence any reporting. 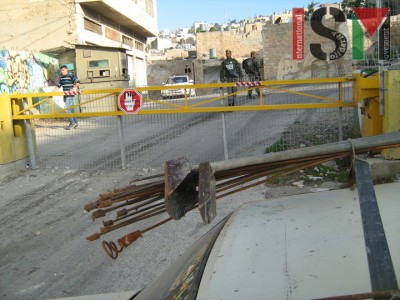 In the afternoon, when international activists walked towards the Salaymeh checkpoint to secure the pupils and teachers a safe journey home from school, the border police immediately told the internationals: “If you go through, you will never be able to come back”. When asked why, they just responded “those are the orders”. The internationals chose not to go through the check point but to monitor it from the inside, standing ten meters from the checkpoint as is the limit for how farauthorities can require that observers stand. As the law requires that any orders regarding ‘closed military zones’ be displayed with dates and maps of affected areas, the activists asked to see this order. Immediately, the officer standing closest to them yelled to the other police in Hebrew to “bring pepper spray and handcuffs”, so the activists were made to move back to a place where the check point was still within sight. After around ten minutes a car with two male settlers stopped at the check point and talked with the soldiers. After that the soldiers approached the activists telling them to move further back out of sight of the checkpoint. The activists were forced to leave due to fear of violence from the police.

At Queitun checkpoint this morning, approximately one hundred fifty children from several local schools remained outside after the start of school. Israeli Border police began shooting tear-gas
grenades around 7:15 am, and very quickly shot thirteen rounds of tear-gas via grenades and canisters directly at dense clusters of pre-pubescent boys. Faces everywhere were red, swollen and tear-streaked. Upon time to return home, four international human rights observers were denied passage through two checkpoints by Israeli forces first without explanation, and then on grounds that they had cameras in their possession, a restriction which is illegal by Israeli and international law. 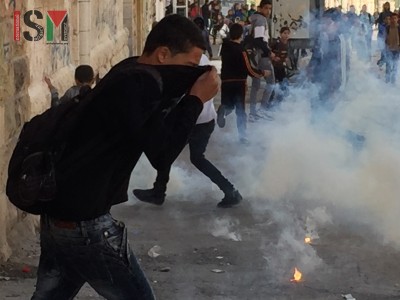 In the afternoon, international observers were again denied their legal right to pass through the checkpoint without any reasons.

This noon, children and teachers were prevented to return home by Shuada street by soldiers explaining the ‘closed military zone’ was ‘for security reasons’ and ‘a new measures against terrorism’. They stayed on the stairs, blocked by the army for nearly one hour. In the same time, four settlers including Anat Cohen and one who filmed with his phone conviced the soldiers to push the children back. Because of the children and teachers refusing to leave – as they were not allowed to proceed on the stairs –  soldiers called the police. After a long talk with the four settlers who didn’t want to leave the stairs and insulted the director and the children, the soldiers and the police finally authorized the children to go home and walk through Shuada Street in small groups of children and teachers. Israeli forces at the checkpoint threatened the children to walk faster, pointing their loaded guns at them. 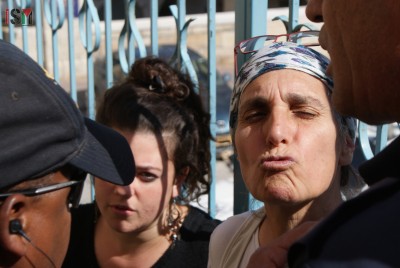 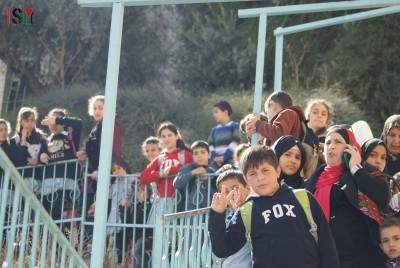 School-children blocked on the stairs by Israeli forces 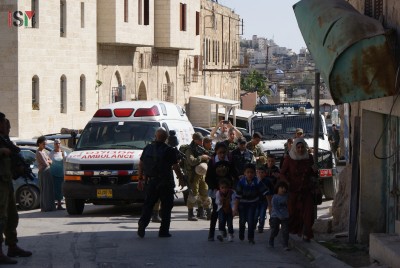 Whereas in the morning, an actual order for a ‘closed military zone’ was still in place, the order was only valid from Saturday morning 8 am till Sunday morning 8am and thus not valid for the end of the school day. 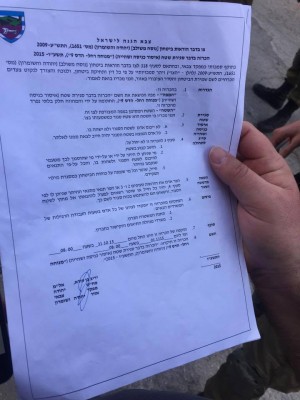 The order for a closed military zone is a clear infringement on Palestinians freedom of movement and clearly only geared towards exactly this aim. Whereas Palestinians all over the areas declared ‘closed’ are forced to undergo constant body-searches, detentions, ID- and bag-searches and are randomly denied access on the soldiers whims, settlers from the illegal settlements within al-Khalil (Hebron) are allowed to freely roam the streets without being stopped at any time. International observers documenting and reporting are facing yet another instance in which Israeli authorities are making determined strides to completely rid Al-Khalil of any witnesses for the myriad and worsening ways in which they violate the basic rights of Palestinians on a daily basis.

All these measures clearly illustrate the real aim of the latest escalations in violence geared towards instilling fear in the Palestinian residents and ultimately force them to leave the area.