This morning at Qurtuba school in al-Khalil (Hebron), Israeli soldiers harassed school-children, teachers and adults trying to pass the nearby checkpoint.

The stairs leading to Qurtuba school, the scene of a heinous murder of a Palestinian youth by Israeli forces three days ago, are directly opposite a checkpoint dividing segregated Shuhada Street into a small strip where Palestinian residents are allowed to walk and the former main Palestinian market now completely closed for Palestinians and only allowed for settlers. The school has, due to its proximity to the illegal settlement of Beit Hadassah been a flashpoint of settler attacks and violence against Palestinians and internationals.

As teachers, school-children and parents are equally scared with violence rising and 19 Palestinian youth shot to death in the last two weeks, all the school-children are now gathering in one place in order to walk to school together. Parents living there were watching out for the children, telling them to move away from the street as soon as they could hear a car in the distance, afraid settlers would run them over if the children didn’t move fast enough. This has happened in the past and settlers continously try to hit children with their car.

Soldiers at the checkpoint denied one Palestinian adult around 30 years old to walk down the stairs. The soldiers stopped him and didn’t even ask for his ID, but ordered him to go back up the stairs and walk around. A group of female teachers and girls were ordered to stop in front of the stairs and made to wait for about 5 minutes. Again, soldiers did not demand any ID or to check bags, and finally allowed the group to pass and go to school after about five minutes. 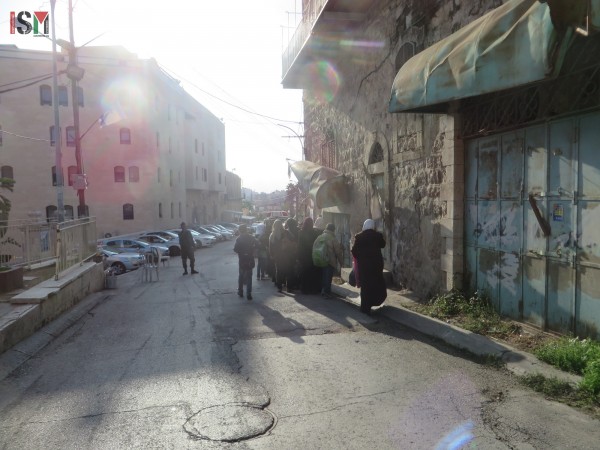 All of this comes at a time, where the whole neighbourhood has been declared a ‘closed military zone’ by the Israeli forces, further infringing on the already restricted movement of Palestinians – while settlers from the illegal settlements are allowed to roam the streets freely.

This illustrates the daily harassment Palestinian children and teachers have to face on their way to and from school – a clear infringement on the basic right to education. But this does not only ring true for school-time, harassment and intimidation by soldiers and settlers are increasingly becoming an integral part of day to day life for Palestinians.