Monday 2nd November 2015, Israeli forces again attempted to prevent international observers from monitoring a checkpoint in a flashpoint location in occupied al-Khalil (Hebron). Settlers from the illegal settlements in al-Khalil physically attacked internationals while soldiers where standing idly by watching.

As on every morning, international observers were on their way to checkpoint 55, dividing Shuhada Street into a small stretch where Palestinians are allowed to walk, and the former main Palestinian market which is now a ghost street emptied of Palestinians, who are prohibited from entry. On the way there, the three international observers were stopped by soldiers while walking past another checkpoint. Soldiers ordered them to pass through the checkpoint, even though that was in the opposite direction to where they were going. The Israeli forces at first refused to give a reason for this order and then explained that it was, ‘a rule’ and that, ‘they say so’. 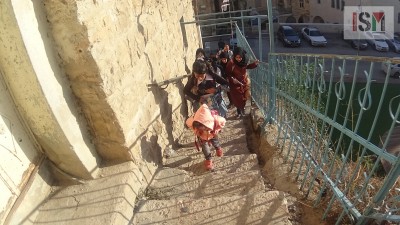 School-children climbing the stairs to their school

A official order for a ‘closed military zone’ was in place the day before, but had expired today. Still, Israeli soldiers claimed that the internationals did not live in the area and therefore were not allowed to be there. At one point, soldiers grabbed one of the ISMers by his arm, saying that they were going to arrest him. When reminded that, as soldiers, they were, according to the Israeli law, not allowed to arrest internationals, they refrained from the arrest and instead noted down his passport number. During the whole discussion, internationals were repeatedly threatened with arrest, for no reason. 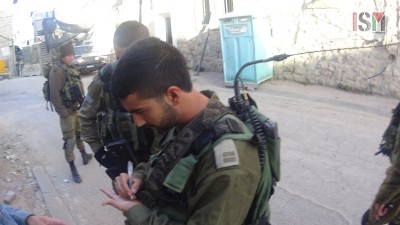 Israeli soldier writing down passport number of an international 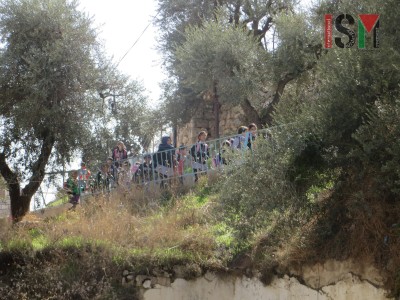 In the afternoon, Israeli forces arbitrarily decided to forbid internationals from going up the stairs to the school, forcing them to remain at the bottom of the staircase. Due to their fear of being attacked, all the children left the school together with their teachers – and were allowed to pass through Shuhada Street on their way home, contrary to the previous day, when soldiers denied them their right to go there on their way home. Right after the children had passed, the infamous, violent settler, Anat Cohen, drove up in her car, trying to knock down one of the internationals with her car. She then – in plain view of a group of four soldiers – physically attacked the two internationals, hitting them in the face several times, punching them and trying to break their cameras. Even though the internationals asked the soldiers to intervene, they merely stood by, watching. An elderly settler man pushed one of the internationals, and another one tried to grab the camera from her hand. Throughout the whole attack, the settlers present, as well as settlers from the nearby illegal settlement watching from their windows, insulted the internationals calling them ‘Nazis’ and telling them to, ‘go to Auschwitz’. Requests by the internationals to make a complaint against the violent attack were ignored.

Watch a video of the attack:

The soldiers, in the morning, occupied with harassing and intimidating international observers, let school-children pass up the stairs to the school and kindergarten without harrassing them any further. While female teachers were allowed to pass without being stopped, male adults coming down or up the stairs were stopped and ID-checked by the soldiers. With the escalation of violence and harassment against Palestinians in recent weeks, the way to school for the children has become increasingly intimidating and dangerous, not only for the school-children, but also their parents and teachers.