This Friday morning, at approximately 10:30 am, a group of 6 soldiers came down the mountain from the illegal Israeli settlement, Arousa, in the village of Burin, to prevent the family of Ahmad Mustafa Najjar from picking their olives. 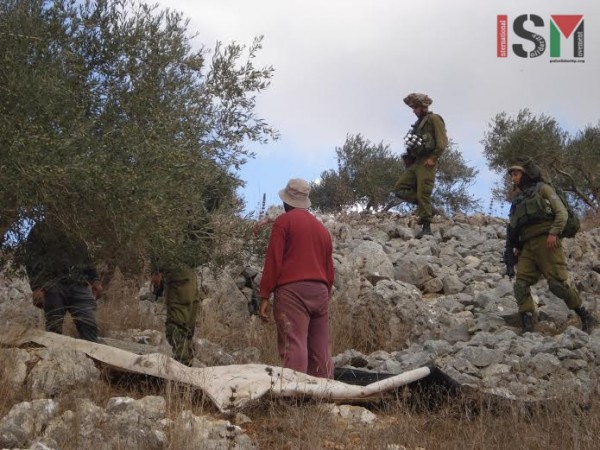 Early in the morning, a group of illegal Israeli settlers from Arousa came to the farm and began threatening and intimidating Ahmad’s family. Ahmad’s uncle, Salah Najjar, telephoned Abu Mursi, from the District Coordination Office, to ask for help and managed to make settlers go away. Soon afterwards, a group of six soldiers arrived shouting aggressively and demanding the family to stop working. The family protested and the commander argued they were not authorized to pick olives, despite the fact that the family owns the land and trees and, therefore, does not need to have a permit. International activists asked the commander and soldiers what was the reason to stop them from picking olives from their own trees inside their privately owned land, and the commander and soldiers would not give an answer. 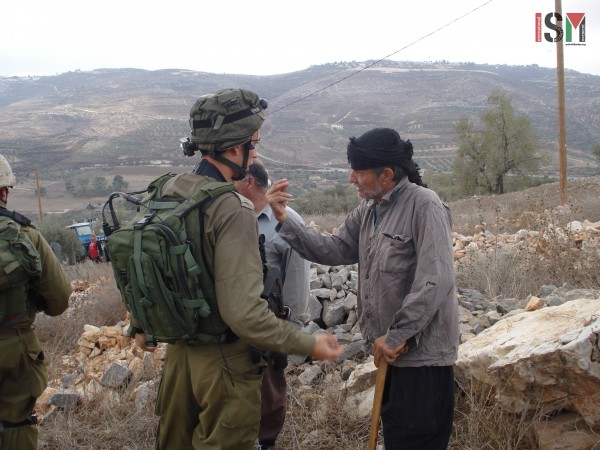 Abu Mursi, member of the village council, argues with commander that the family is entitled to pick olives in their field

Abu Mursi, member of the DCO, quickly arrived to the field to insist to the soldiers that the family does not need permission to pick their olives.

According to Ahmad, his family has lost $3.000 shekels because those 4 trees would make 120 liters of olive oil. He adds, “The soldiers violently beat my cousins, Muntasar and Mohammad, and I had to stand between them to stop the soldiers from killing them.”

Burin is a village located south west of the city of Nablus, which suffers from an ongoing harassment from the Israeli army. During the last month, Israeli soldiers have carried out several night raids into the villagers’ homes, waking up families in the middle of the night and searching their houses, with the clear purpose of terrifying the villagers.

Particularly during the olive harvest season, the farmers of Burin are scared of going to their fields to pick olives, especially in the farms located near the illegal settlements, due to the high risk of being attacked by settlers. 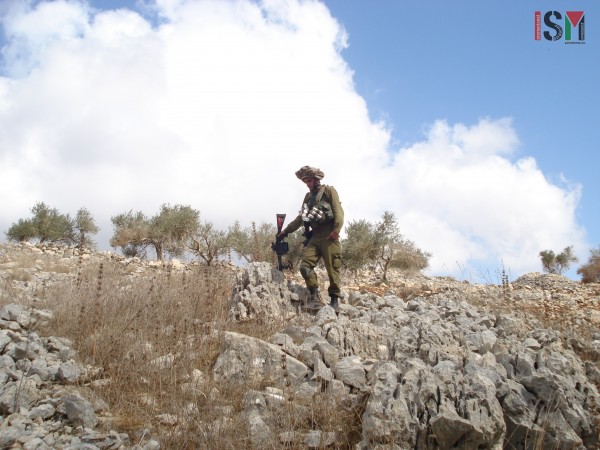 Note how one of the soldiers who came today is loaded with tear gas canisters; an unjustified excess of weapons