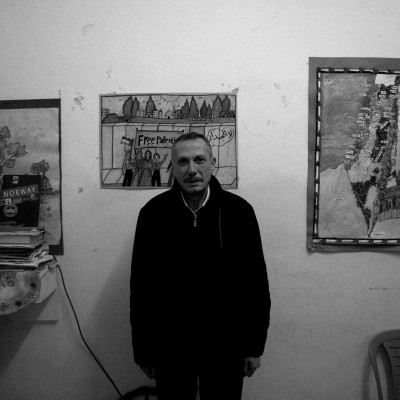 Long term supporter and friend of ISM, Hashem Azzeh, has tragically passed away today aged 54, following health complications exacerbated by the conditions in Al-Khalil (Hebron). Hashem, who had a long-term cardiac condition, called for an ambulance on feeling discomfort in his chest earlier this afternoon. As Palestinian vehicles are banned within his H2 neighborhood of Tel Rumeida, Hashem had to be assisted to walk the 700 meters from his house to the Shuhada street checkpoint in increasing pain. He passed the soldiers who harass him and his family on a daily basis and was accompanied into an awaiting ambulance. He passed away not long afterwards.

Only yesterday, Tuesday 20th October, Hashem picked olives together with international support from the ISM Al-Khalil team. After just 20 minutes of picking, they were interrupted by illegal settlers, armed with machine guns, who made it impossible to continue the harvest for the day. (See more here)

Within his life time, Hashem was subject to an extreme amount of harassment and abuse. Living in the infamous neighborhood of Tel Rumeida in Al-Khalil (Hebron), illegal settlers not uncommonly threw trash, stones and even human feces at his house and family within. As he described in an interview with ISM in December 2013: ”In general the daily life is really horrible. Our children get harassed on their way to and back from school. We get controlled and searched at the checkpoint every day.” Him and his wife Nisreen also tragically lost two children due to settler violence.

The inability to easily access medical assistance within Tel Rumeida was just one example he gave of the stranglehold effect of Israeli forces and illegal settlers on this neighborhood. “I used to climb a six meter wall to access my home. When my wife was pregnant I had to carry her all the way, when she was about to give birth. It took us three hours to get to the hospital.”

Hashem was an admired friend to many internationals and his house was always open for a cup of tea on the occasions that soldiers allowed passage through the street. He strongly resisted the occupation and undoubtedly inspired many people with his stoic commitment to both his family and his city.

An ISM Al-Khalil team member stated tonight, “it is hard to find the words to respond to these senseless attacks on innocent families at the best of times. As this tragic and avoidable death follows weeks of escalating violence in Al-Khalil, and years of constant harassment of the Azzeh family, we are looking back on Hashem’s words from the past…’the army and the settlers have done a lot to me here. They want me to move but I will never give up, we are still fighting until we get our freedom…‘” Our thoughts go out the family of Hashem who lost a father and husband today, and we continue to stand in solidarity to that end.

An autopsy will occur overnight to determine the exact cause of Hashem’s death and the degree to which the Israeli-delayed medical assistance contributed to his untimely passing. There will be a funeral tomorrow, October 22 at 12pm in Al-Khalil.

He will be sorely missed in Tel Rumeida and around the world.