Wednesday 28th in the evening activists from the International Solidarity Movement once again received a call from local shop owner Ghassan telling that his shop was being surrounded by settlers from the illegal settlements in al-Khalil (Hebron).

The settlers were shouting curses at the Palestinians in the shop, harassing them and physically blocking the entrance to the shop. A group of about 6 adult settlers, most with machine guns, and a dozen of children were blocking the street in front of the shop and tried to prevent internationals access to the shop. The Israeli police did provide passage through the mob of settlers but then ordered the internationals to leave the area as soon as they realized ISMers were going into the shop. 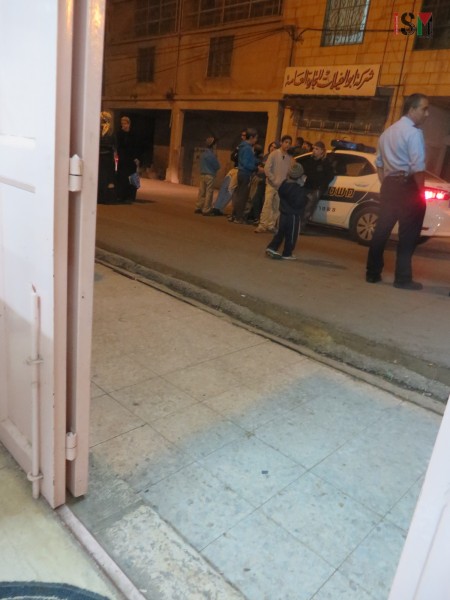 The group of settlers kept shouting insults at the shop-owner and Palestinians as well as the internationals inside the shop. The settlers attempted getting into the shop, but luckily were prevented by the Israeli forces. When groups of settlers started attacking and insulting everyone inside the shop, the police banged one of the two remaining open door-jambs closed. A female settler, as can be seen in the following video, then insulted Palestinians, threatening them and calling for their death:

Instead of preventing this violent attack, Israeli forces slammed the door shop thus locking everyone on the inside in the shop without a possibility to leave or communicate. The settlers could still be heard banging on the doors and yelling. Only after the yelling and commotion calmed down after more than half an hour, the owner slowly opened the door to see if the settlers were gone. A few soldiers were still standing outside the shop, but no one informed the people on the inside of the shop that they would be able to open the door of the shop and thus get fresh air.

Short video of the police slamming the doors shut:

Ghassans shop is one of the last remaining Palestinian shops on Shuhada Street. Most Palestinian shops in the area, which used to contain Hebrons main fruit marked, have been closed by soldiers or the owners driven away by harassment and violence. Ghassan’s shop has, since it was opened in spite of violent settler-protests in the middle of this year, experienced countless incidents of settler violence and harassment.