Chaos in the streets of Gaza.  Israeli forces showered the strip with gunfire while Palestinian medics ran frantically to evacuate those crumpled on the ground with blood rushing from holes in their bodies before racing for cover themselves. Running from the violent, precision Israeli military assault, some were felled in the act as lethal and non lethal projectiles met with their skin. …And behind a waist-high concrete cylinder a Palestinian father and his 12 year old son Muhammad took cover.

It is the second day of the second intifada and it was fifteen years ago today.

The spark of the furious uprising was lit by then Israeli opposition leader, Ariel Sharon, after visiting the Temple Mount in Jerusalem’s Old City. Violence saturated Jerusalem, soon racing through the West Bank and Gaza. A second mass uprising, an intensified Palestinian resistance to Israel’s criminal subjugation of them. Four and a half years of shaking off. 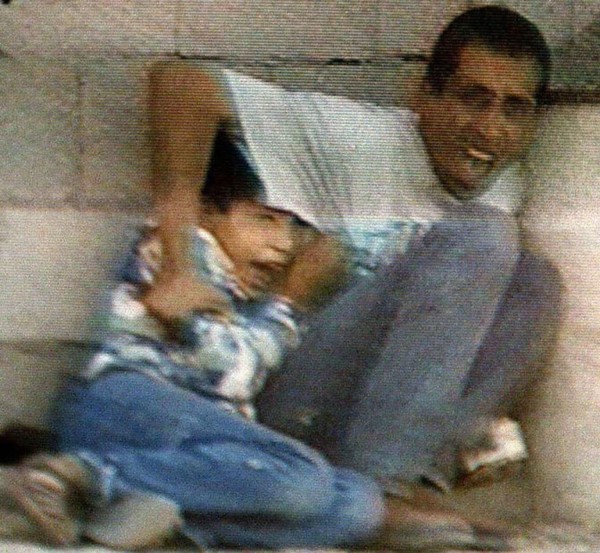 Photo of Mohammed hiding behind his father
Photo credit: France 2

If any image were to encapsulate the tragedies of what was termed in the report following the incident, where Israel issued an apology for the boy’s murder, describing it as a ‘fog of war,’ it would be a young Palestinian boy and his father kneeling on the ground, eyes wide in terror just seconds before the unthinkable happened. Filmed by Talal Abu Rahma, a Palestinian cameraman freelancing for France 2, Jamal al-Durrah and his 12-year-old son Muhammad are seen, backs pressed against the wall, Jamal’s arm shielding his young son whose mouth is oval with what must have been a paralyzing fear. And then the shots.

When the cloud of dust cleared, the boy is on his side, draped over his father’s lap.

Throughout an enduing four and a half year widespread Palestinian resistance, with all of its gut wrenching failures, and with the solace and strengths of solidarity en masse coming from both the history before the second intifada and the aftermath in its’s wake, the slaughter of Muhammad al-Durrah continues to be a defining moment. A young boy viewed guilty through the eyes of the Israeli military due only to the origin of his birth.

In the investigation to follow, an Israeli-initiated tug of war of blame across the grave of and over Muhammad’s murder ensued. Where initially the Israeli government took blame and expressed public relational regret with an apology, that space soon became occupied with denials, accusations and disturbing tales of Palestinian’s faking the boy’s death. If only Palestinians weren’t so busy mourning the actual mass murders of their children in order to be able to spontaneously arrange for the staged murder of one, a second intifada might not have been necessary, nor a third or a fourth for that matter.

Without politicizing the end of a human life, in a 67 year crime drenched in politics; fifteen years ago today a terrified little boy was shot to death while he hid beside his father. And the world should remember his name.