The lawyer of the Totah and Totanji families has been in touch with Israeli Authorities, and has found out, that there is no demolition order on the Wadi Joz neighborhood. There has only been given a cleaning order on Wadi Joz, so the wave of home demolitions is illeagal according to Israeli law. The lawyer will now take the case to court, and hopefully there will be no more demolitions in Wadi Joz. 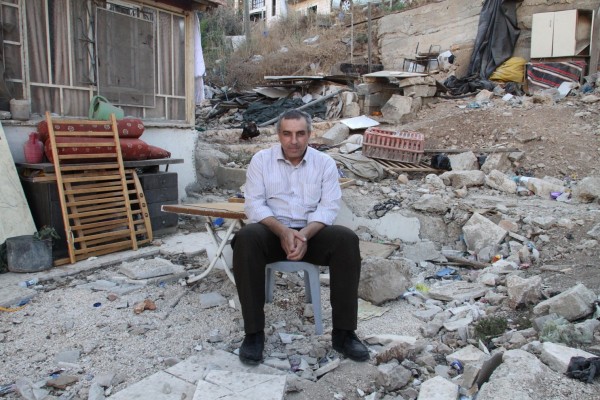 Nureddin Amro sitting on the rubble of his home, which was demolished on March 31st this year (photo credit The Washington Post)

On Wednesday August 19, at 5:30 AM, Israeli occupation forces began demolishing a three-story home of the Totah and Totanji families in the Wadi Joz neighborhood of occupied East Jerusalem.

“A large number soldiers and policemen are blocking main road in Wadi Joz right now. There is no electricity because they demolished the neighbor’s house and the power network. They kicked the families and people into the street, in the middle of this hot weather, showing no humanity. Stated Nureddin Amro, a resident of the Wadi Joz,  “They want to confiscate the entire neighborhood”.

On March 31, 2015 Israeli forces demolished most of Nureddin Amro’s house and that of his brother, Sharif Amro, both of whom are blind and live with their families, including 7 children under 14 years of age and their mother who is 79 years old. There was no demolition order against the houses and no prior notice. Israeli forces barely waited for the family to leave the rooms that were going to be demolished and physically attacked the family. Some property belonging to the Totah family was also destroyed that day. Since then, the Amros and Totahs have lived in constant fear of further demolitions. Other homes in the neighborhood are also slated for demolition.

Wadi al-Joz is located directly outside the Old City of Jerusalem in a vulnerable area with three demolitions in the last two-and-one-half weeks. Land near this neighborhood was already annexed by the Israeli authorities to create a national park encompassing an illegal Israeli settlement.