Of the two main entrances to the village of Nabi Saleh, one of them – which connects to the villages of Kufr Ayn, Karawa and the town of Salfit – has been permanently closed by the Israeli army since 2001.

Last week, on the main road that connects the village with Ramallah, there was a car accident that killed a four year old child. The villagers blame the accident on congestion caused by the closure of one of these two gates.
On Thursday, July 16th at approximately 5.00 am, young men from the village began trying to open this gate. Since the two gates are next to one another and permanently surveilled by an Israeli watch tower, this led immediately to clashes in which soldiers used tear gas and live ammunition. Within the next hour, four Israeli military vehicles entered the village and began firing rubber bullets, live ammunition, sound bombs and tear gas canisters at random. 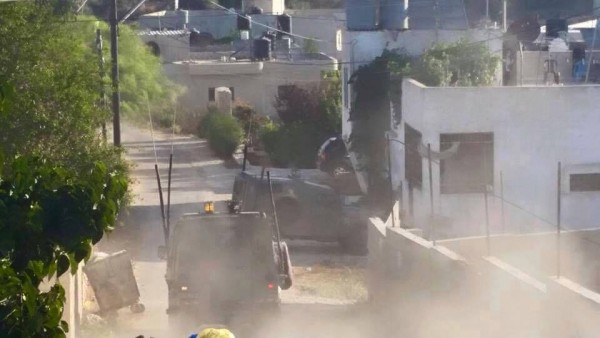 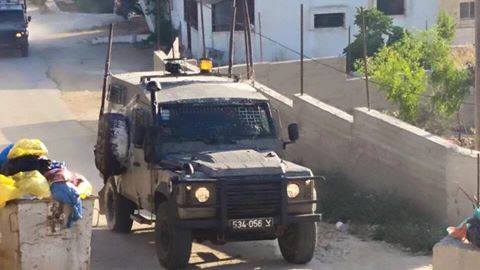 Largely due to the fact that most inhabitants were still in their homes at this early hour, no one was injured by bullets. However, being unable to take precautions, elderly people and children were particularly affected by tear gas entering through windows. 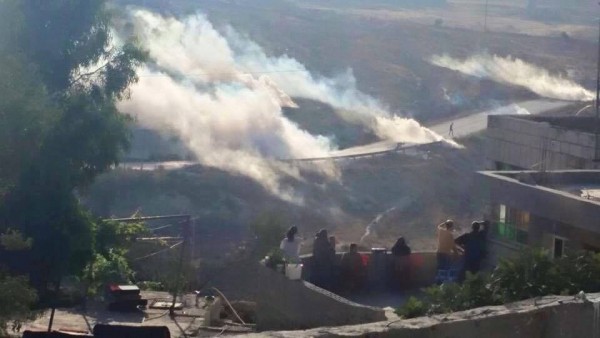 Clashes lasted for three hours, finishing at 8.00 am. As of 7.00 pm, the village’s last remaining entrance to a main road (the one connecting to Ramallah) has been obstructed by a newly established checkpoint. This leaves the villagers with the only alternative of using a backroad entrance leading to a circuitous route which adds up to an hour and a half to journey times. 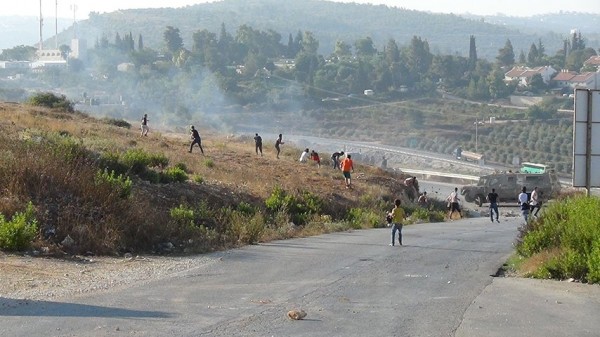 Young men in the village confronting the Israeli military.

This happened in the eve of the Islamic festival of Eid Al-Fitr, when visiting relatives in other villages and cities is of enormous importance; in addition to the obstruction of access to work, healthcare and education that will inevitably follow for the inhabitants of this small village in days to come.
97% of the land area of Nabi Saleh falls under direct Israeli military control (area C), of which 60% is in the hands of settlers. The village has suffered a long history of human rights violations by Israeli forces. 13 houses are scheduled for demolition, comprising 18% of the housing stock of the village.
Since 2009, when the village initiated regular protests, numerous villagers have been seriously injured or imprisoned. 22 people have been shot with live ammunition, 15 of whom now face chronic disability as a result. Two people have been killed. 190 people have been imprisoned, most of them from Nabi Saleh itself and the remainder from other surrounding villages who joined the Nabi Saleh protests. Of these prisoners, 40% are minors and 15 are women.
Local sources stress that the large number of disabilities caused by live fire incidents should be seen in the context of a new strategy, first seen in last year’s protests against the bombing of Gaza, whereby Israeli snipers appear to aim deliberately with low calibre .22 rounds with the intention to cripple. 90% of protestors shot with .22 rounds have reportedly been injured in the left leg. Often this results in the severing of a nerve, causing irreversible loss of movement in the foot.
One such victim is Neriman Al-Tamimi. A local volunteer for Israeli human rights organisation B’tSelem, Neriman was shot in January in the village’s main road while using a video camera to film soldiers. Despite an operation to fit two metal plates in her leg, she has been unable to walk without crutches since, and will require further surgery. Two months after sustaining the injury, Neriman was again confronted by soldiers as she filmed them firing rubber bullets and tear gas canisters close to her home in the village. The soldiers asked her whether she hadn’t learned her lesson and threatened to shoot her in the other leg.
Photo credit to Bilal Tamimi.
Clashes Live Ammunition Nabi Saleh Tear Gas 2015-07-17
ISM Media