The family El Najjar was expelled during the Nakba from the Palestinian village of Salamah. This village was the subject of a total ethnic cleansing by the Zionist colonizers.

Nowadays just ten houses remain from the almost 2000 that formed the village. In its place today we can find the Tel Aviv suburb known as Kfar Shalem. 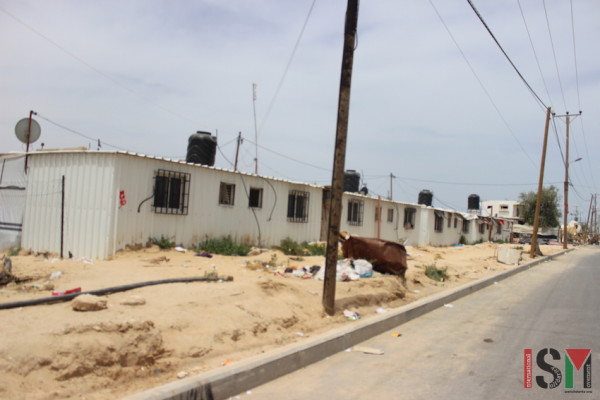 Refugees since 1948, many of them established themselves in Khuza’a, a peasant village in the southern part of the Gaza Strip. For the last eight months a great part of the family has been living in caravans, as more than 45 homes belonging to the El Najjar family were bombed during the 2014 massacre.

In one of those, ISM members met Ashraf El Najjar, member of the family who also lost his home during the umpteenth Zionist massacre.
Ashraf is 41 years old and has seen how the Zionist entity bombed his home two times already. The first one was in 2009, during the massacre known as “Operation Cast Lead”, in which Israel also murdered one of his brothers. After that it took him several years to rebuild his home. However, once rebuilt, he could enjoy it just for 18 months, as in 2014 the Israeli occupation once again reduced it to a pile of rubble. This time they also murdered his father, two brothers, two sisters and his cousin. 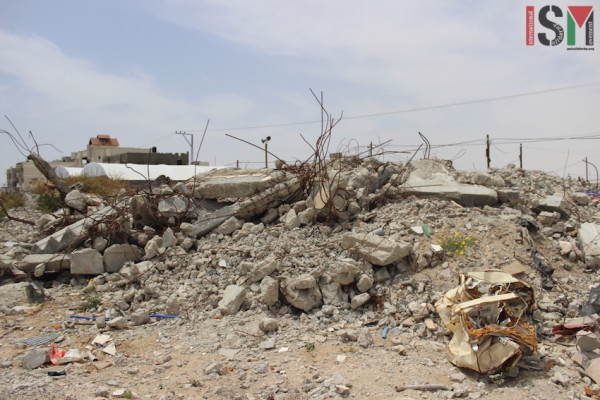 The result of Israeli bombings

With a smile on his face, despite his terrible circumstances, he shows ISM the caravans were most of his relatives survive nowadays. “We don’t have any hope regarding the reconstruction. No one has been here to check about our situation or needs”.

The first caravan he shows ISM is the one of Youssef El Najjar, who is now in the Hospital accompanied by his wife.
In the caravan we find Youssef’s daughter Azhar, 18 years old, taking care of the rest of the family. She is responsible of her grandmother, who lies disabled in the only bed in the caravan, and her younger siblings. The youngest, four years old, can only move around by crawling on the ground, as a birth defect prevents him from walking.
Azhar explains ISM how the life is in the caravans, “In winter we suffered a lot from the cold and the caravan flooded every time it rained. One time the water reached more than one meter’s height. Another time when the water rose the floods dragged all the sewage into the caravan. Now, in summer, the heat is unbearable, as an oven. I feel like I’m living in a grave”. 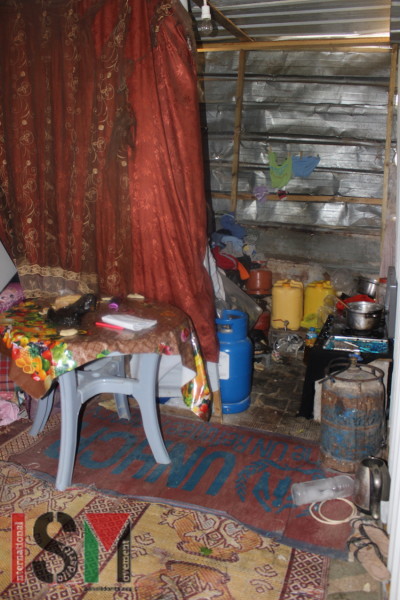 The next caravan we visited is the one of Asisa El Najjar, 65 years old. She lives there along with eight more people, five of whom are children. Her husband is in the hospital as well, therefore, he cannot work.
Three of the five children belong to Wasfi El Najjar, son of Asisa who was killed by the Zionist army during the last massacre, being just 26 years old. The older one is four years old and the youngest, who is only five months old, never met his father.
Asisa tells ISM how she and her husband suffer from asthma since they live in the caravan. She also shows us how the sewage of the bathroom goes to the only room of the caravan.

A few meters from there we find Mohamed and Suher El Najjar with their five children. Mohamed is unemployed, and the five children suffer from respiratory problems since they live in the caravan.

Hasma El Najjar, 75 years old, lives alone in a caravan that like all the other has the wooden floor completely rotten by the last winter rains. Which has caused her to fall several times already.

Finally ISM visits the caravan of Khadia EL Najjar, 53 years old, who lives with her husband and her grown children. One of the daughters has cancer and due to the criminal blockade imposed by Israel and Egypt she can’t receive the treatment needed.

Ironically, these caravans have been provided by the UK government. The same country that colonized Palestine for 26 years and later on handed it over to the Zionists, opening the doors to 67 years of land theft, occupation and genocide.