“…but still with a few hope in our hearts”

Editor’s note: This is the testimony of a 23 year old woman who survived the land invasion of Khuzaa, Gaza, in the summer of 2014. This is the original version of her writings and no edits have been made.

We were in Khuzaa in our grandfather’s house when the war started. We thought Khuzaa was the safest area. But the 23rd July Khuzaa was a surrounded by tanks, drones and we started hearing many bombs.

We went to the basement to hide from the shooting but my grandfather stayed in the first floor with the other men…
Four days passed by very slowly and with a lot of difficulty, in the last day someone came to tell us that we had to leave Khuzaa.

We accepted and hurried up to the street, we were frightened, the planes were upon us, we were surprised because we thought there was nobody left in Khuzaa, but we saw many people crying, shouting, men injured by gunshot, they were walking covered in blood.
All was very sad.
While we were walking we saw the smoke from the bombs. Everyone was crying, men, women, old people and children.
The trepidation got into our hearts.
Some bombs felled in front of our eyes.
The streets were full of people running.
At some point we had to return back because we found in the street a big hole made by a rocket that prevented us to continue. 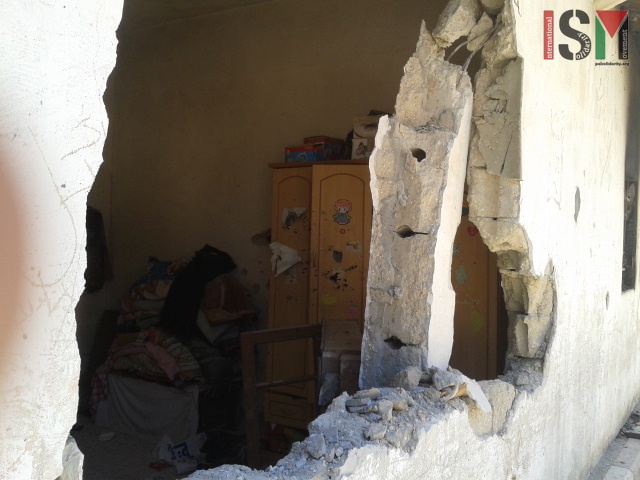 When we returned back we found many families in the ground floor.
At night Apache helicopters started hitting the homes with the families inside.
We heard the footsteps of the occupation soldiers; the children were very quiet, they were afraid that the soldiers would hear them.
We heard many people getting killed in their homes.

In the morning somebody came and told us we must leave Khuzaa because Israel was killing everyone, they were shooting at everything, moving or not…
We forced ourselves to go out, but my grandfather refused to leave “I want to die in my home, not in the street like the people from Shijaia”. 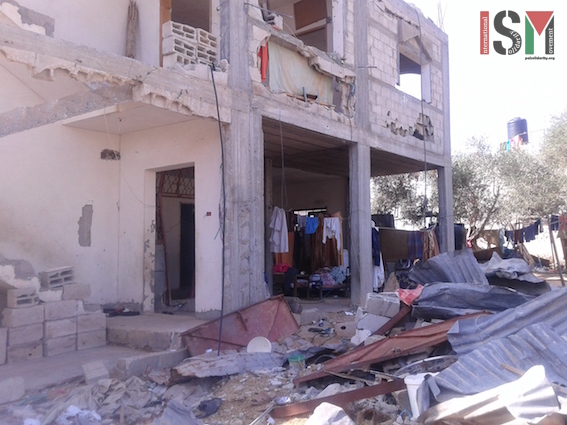 We went out thinking that we would be killed by the zionist occupiers, but still with a few hope in our hearts.
I left with my mother, my sister and some other people; we saw rubble, glass and corpses in the street.

I saw a child in the street with his stomach and bowels out. I started shouting what was that, where was the world, where were the Arab countries… and kept crying while going on.

We couldn’t do anything because we were afraid we would get killed by an helicopter or by any kind of weapon, we didn’t know where were the zionist soldiers.

We kept running and running. When we arrived to the entrance of the village we saw many tanks and many soldiers, I was crying so much, and the soldiers started laughing at me.
I’m so sorry I couldn’t stop crying!

When we arrived to Khan Younis we received the bad news, my grandfather had been killed by the occupation. My uncle, who also stayed in Khuzaa, explained me what happened: “grandfather went out from the basement to tell the soldiers that there were just men, women and children in those homes, who had no weapons to defend themselves. But the soldiers killed him putting two bullets in his heart. Everybody was crying then, we were frightened. After that they took us out and took the men to the homes that they were using as base and put them in front of the windows, as human shields. Later they started hitting the men with sticks. Then ordered Alaa Qudaih (the nephew of my grandfather)to take off the clothes of my grandfather. Alaa couldn’t stop crying while doing it. After he covered him with a red blanket. Finally the occupation ordered us to leave Khuzaa and go to Khan Younes. 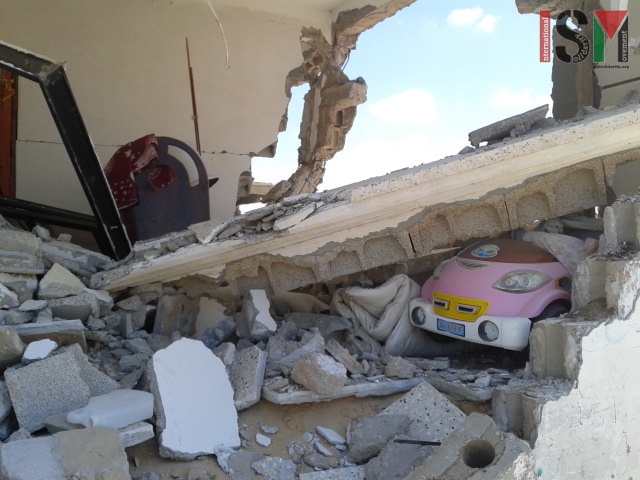 After three days the occupation allowed us to finally take the corpses to the Hospital.
There were many corpses in the streets, in their homes and under the rubble.