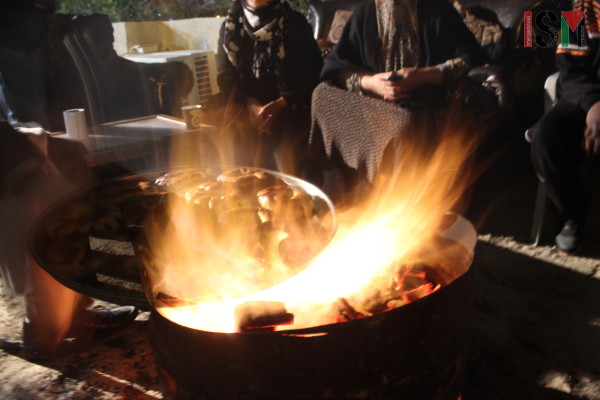 The family and internationals sitting around a fire during the night

This has been hard to write down. The three of us put off again and again the thoughts and fears of that day, to remember them and to finally write them down. We have been avoiding it, because it is easier to simply try and forget. But then at the same time, for us it was just this one night, whereas for the families living in the occupied East Jerusalem neighborhood of Wadi al-Joz this is everyday life.

An illegal demolition of the majority of the Amro-family home on the 31st of March, 2015 left all the families in Wadi al-Joz scared for the future. If Israeli forces can just turn up one early morning and tear down half a family home without prior notice or any legal grounds, might this also happen to the other few families still living in this neighborhood?

On a Sunday night, the 18th of April, 10 international activists and journalists as well as a few members of the Tutalji family sat outside the family’s home. It was a cold night but we had set up a fire to warm us up. The stars were shining and we were drinking tea and chatting. The children were asleep inside.

The truth is, the atmosphere was filled with fear and despair. Only a few days earlier, the Tutalji family had received a demolition order for their house, home to Aref Tutalji, his wife and adult daughter, as well as twelve children, aged between 4 and 18 years. They were told the Israeli army would come to demolish their home at four o’clock that night. At very short notice the family now stood to be homeless. After seeing what happened to their neighbours, the Amro-family, the Tutalji family tried to store their life, their most precious belongings, in cardboard-boxes to be kept outside the home.

The Amro family told us that they wanted to get rid of the rubble of their house, but felt it difficult to do so due to their connection to the house. They felt attached to the rubble. The house of your family is not just four walls and a roof- it is your history. You feel the memories in the walls, and you know every corner and every crack, even if you are blind – as is the case with Nureddin, the father of the Amro family.

It was a long night; sitting outside the house, listening to the family’s stories, their fears and desperation. What are they going to do if their house, the only home they’ve ever known, gets destroyed? What kind of future would that bring for their children? Were they going to be killed by the army, that told them that, when they come, they “see nothing in front of them”? As a precaution, the family-dogs were given away and animal shelters were moved to the outer limit of their land.

Most of the family was unable to sleep that night. They were too scared they would wake up to their house being demolished or not being able to get out of the house fast enough. Listening to the family talk about their fears, not only for this night, but also for the longer run, it was hard to hold back the tears.

Earlier that night, the three of us sat down for a pizza in the old town of East Jerusalem – self-care, we called it. We went through possible scenarios for the coming night, scared and unsure of what was about to happen. What would we do, if the army immediately starts demolishing the house? Were people going to get hurt – were the children going to be beaten by the army, as happened during the demolition of the Amro-family’s home? It was good to talk about all the possibilities, but also hard to admit how scared we were of what might happen during this night.

We felt the frustration of the father who kept asking why this was happening to his family. Why did their house pose a threat to the Israeli state? Where were they going to sleep? What about the kids? He pleaded that he doesn’t hold grudges against Judaism, Christianity or any other religion, and told us that he wanted nothing more than to live in peace, side by side with his neighbours. But how can he live in peace when they come and ruin his home? These house demolitions are strange. After having lived for several generations on their land, these people are pushed out of their homes in order for Jews from Brooklyn to come and replace them. You have to wonder why.

In the early evening, we tried to get some sleep, but every time we heard the sound of a car driving past the house, we would sit up, turn our heads and look at each other, sure that now, they were coming to tear down the house. It would take some time listening to what was going on to realise that again, this was just a car driving past – until we heard yet another car. Next morning the Amro-family told us that having internationals stay with them meant they were able to sleep through the whole night for the first time for three weeks. Having stayed only one night, not being able to fall asleep dreading what might happen, we were able to understand that easily.

For us it was only one night. For the families living in this neighborhood, this is everyday life. Every night, the families wonder what to do, how to continue their life, if all their belongings are destroyed with their house. Every night, going to bed they are worried they might not have a house the next morning. Every night, they have to worry about getting beaten, to have their home – and their future – destroyed.