Situated along the main Hebron-Jerusalem road, across the street from a University, sits the heavily fenced and concrete blockaded main entrance to Al Arroub Palestinian refugee camp. Taysir, a 39 year old former prisoner of the Israeli government and resident of the camp, waits out front of the camp entry way to give an intimate and shocking view of Al Arroub which is home to over 10,000 refugees living on less than a square mile of land and originating from nearly 3 dozen villages from as far away as Gaza. 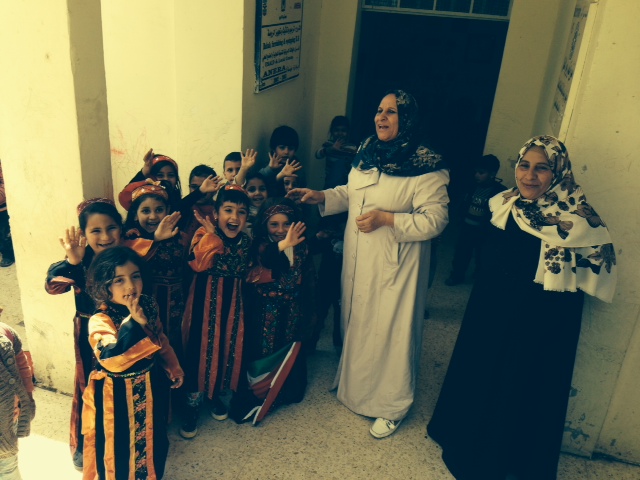 Al Arroub, a maze of crumbling buildings and graffiti telling the story of Palestinian resistance to occupation, was established in 1949 and remained as tented housing until concrete living structures were built in 1956. Just steps into the camp, laid the remnants of a fired rubber-coated steel bullet laying near a post which bore the scar from the shot. Taysir lifts the bullet, “Violence here explodes within moments.” A few more steps and along the building sits a small cement structure to mark the spot where a 17 year old Palestinian boy was murdered, but he is not alone- throughout the camp there are photos, posters and spray paint stenciled portraits of those Palestinians whose lives were ended violently by Israeli soldiers. Palestinian refugee camps are the heart of the resistance and the birthplace of both intifadas; this is evidenced in a colorful section of wall which calls out in Arabic, “Enough! We want freedom!” 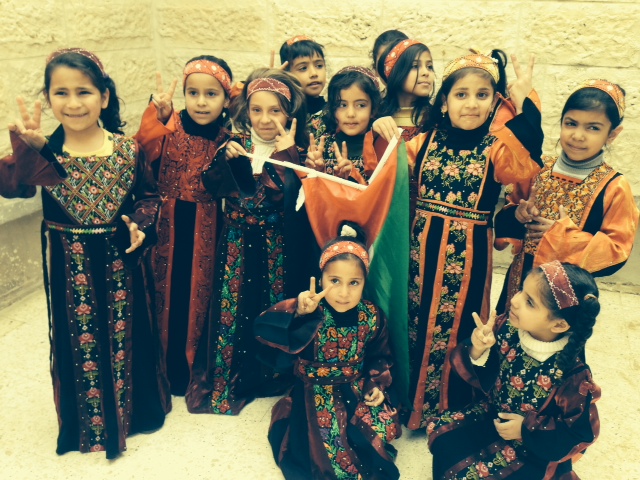 There is one children’s center in the camp and from the outside you can see the cage like fencing around the play area for dozens of young children, their ecstatic yells echoing through the bars. Proud mother’s lead the way upstairs to a room for infants where babies born to an occupied nation lay napping. The children sing, change into traditional Palestinian dress and rush excitedly around one another in the cramped center. One of the main issues facing the refugees of the camp is overcrowded schools. UNRWA’s camp profile cites three schools in Al Arroub; along with high unemployment rates and the lack of an appropriate sewage network.

IWPS members are introduced to Nazaar, whose 28 year old brother Eid, married just one year, was shot two dozen times by occupation forces during a raid in the camp as last year’s war in Gaza raged to a fever pitch. The murder took place on the first day’s Eid celebration of the Ramadan month of fasting as Nazaar was driving his brother’s to a family meal. He stands beside the poster of his murdered brother as he recalls the horror, “This was an execution. They killed him in the streets in front of everyone. Why? He was happy, he loved life. This was a tragedy.” 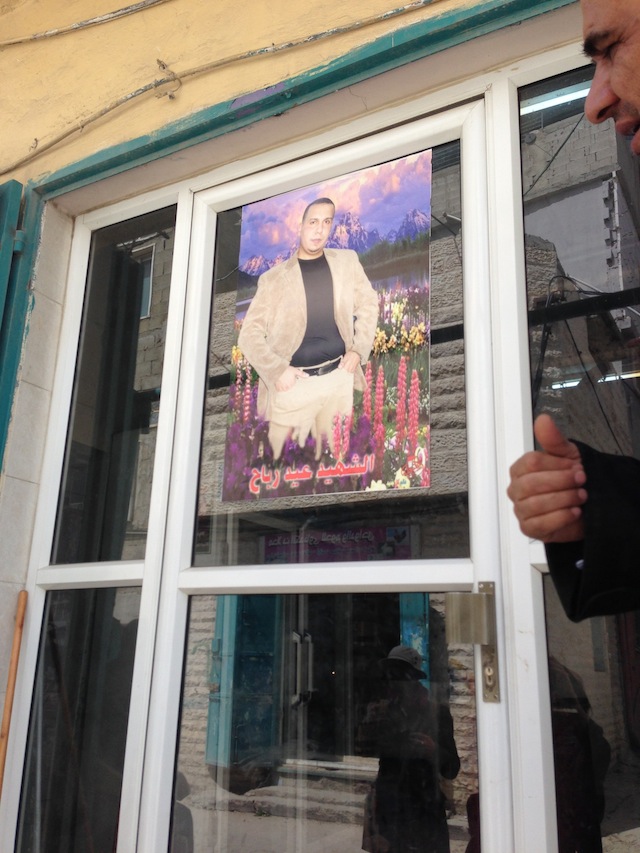 Just over a week ago, violent clashes were reported in Al Arroub when solidarity protests for Ibrahim Jamal, a prisoner of Israel’s Eshel prison, lost sight and speech after hitting his head on the end of an iron bed, occurred in the camp and Israeli forces responded by firing tear gas bombs and rubber-coated steel bullets indiscriminately at the protesters. Jamal, already suffering from an uncurable disease, received no treatment despite being injured in the prison. Violence stemming from Israeli incursions has seemingly touched every life inside the camp. Between raids, kidnappings and collective punishment, the personal stories are as seemingly endless as the occupation itself. 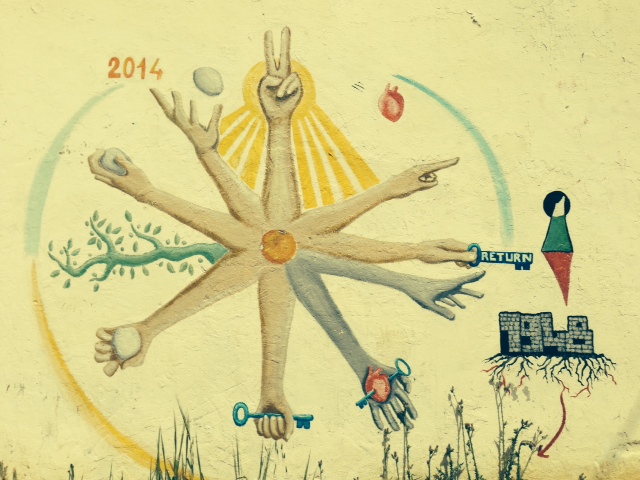 The day is ended at the home of a woman who has had every one of her children imprisoned. Two of which still languish in administrative detention. In the room is Taysir, imprisoned four years- A young Palestinian who was kidnapped from a field near school and imprisoned two years along with a film maker and actor who spent “just a year” in Israeli detention. The young man still bears the scars from his time in jail, two on his knee- for which he didn’t receive medical attention for three days, and many others on his arm- but these were self inflicted. “Before my time in jail, I was happy and gentle. Now I feel rage over the smallest thing. I began to cut myself. I didn’t feel relief until I saw the blood.” He goes on to expose a sinister issue that is eating away at the very fabric of life at Al Arroub and indeed all over occupied Palestine. 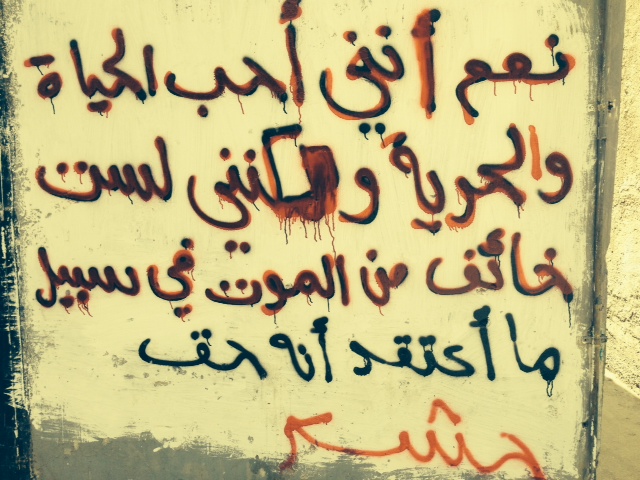 “Yes, we love life and freedom. But we are not afraid of dying for our rights and for the absolute truth. “

“When I was released from prison, I had drug withdawal symptoms and had no idea why.” He fears he was drugged during his time in Ben Yamen, Asharon and Demoon Prisons- It is common for Palestinians to be moved from prison to prison, it is a disorienting and unnerving tactic. “They called me three times since I have been released offering me money, a car and a pass to work inside of Israel if I sell ketamine for them. We don’t need you to collaborate with us, you are our brother, let’s just be friends, they told me.” Collaboration has been reported as a huge point of harrassment, especially for child prisoners, coming from elements of the Israeli military. And drug abuse is rising among residents of Palestinian refugee camps. 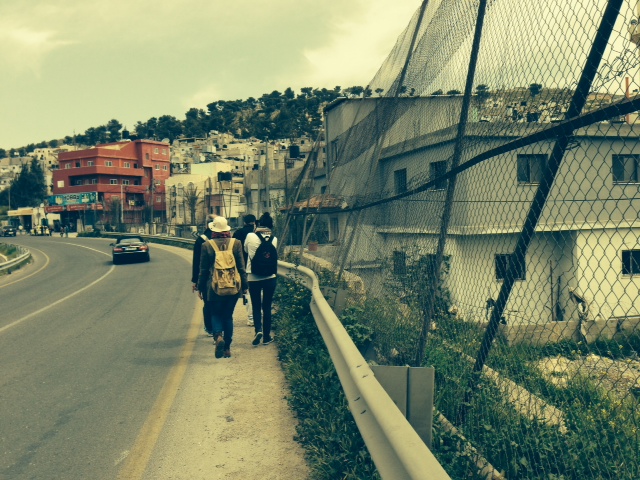 Torture is also a common tactic utilized in Israeli prisons, ranging from psychological and emotional abuse to violently imposed physical trauma. Taysir recalls the hours he spent in a chair, sleep deprived and in isolation. He was seated in a room where he could hear prisoners screaming in pain and calling for help. “You can hear the torture and you fear that this will happen to you next. They do this on purpose.” Taysir went two years in detention before he received a court date. Two years later, he was released through a prisoner exchange agreement. “The pain during interrogation may go away quickly but the pain of the life you spent in prison never goes away.”

At the heart of Palestinian resistance to occupation, Israeli violence, military presence and poor living conditions continues to be the reality of day to day life for refugees living inside of Al Arroub refugee camp as well as the many other refugee camps located in occupied Palestine.