Months after the last massive Israeli aggression against the Gaza Strip, thanks to the social and independent media, everyone has read news and seen pictures of the attacks from the zionist regime against residential buildings, United Nations shelter-schools, hospitals, ambulances, mosques, churches and thousands of family homes.

However, little has been said about the almost complete destruction of Gaza’s industry and economy. As the Israeli Minister of Interior Eli Yishai said, the objective of the last operation was to “send Gaza back to the Middle Ages, destroying all of its infrastructure.” One of the more terrible blows committed towards this end has been the total destruction of the Beit Hanoun industrial area. 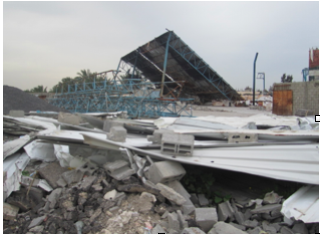 Factory for construction materials bombed by Israel last summer, in the Industrial Area of Beit Hanoun – photo by Miguel Hernández

There were around 50 factories in Beit Hanoun, from which only three have been able to resume work seven months after the end of the assault. 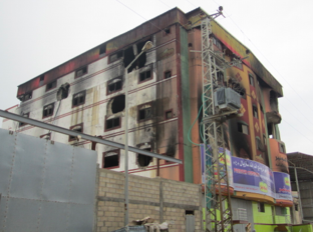 The factories in this industrial area provided work for 25% to 30% of Gaza’s population. Among the destroyed factories are those for paper, construction materials, clothing, medical equipment, plastic products, food and livestock products. 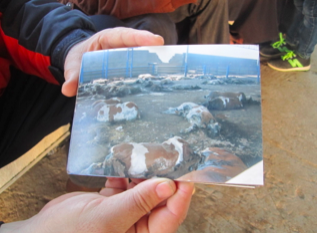 The agricultural industry has also been wounded by Israel’s summer attacks on Gaza. The owner of the Afanah Company showed us the pictures of his 800 cows killed by Israeli attacks during the last war on Gaza. Each cow was going to feed 7 families during the Eid holiday. Besides losing all his cows, Israel also destroyed the four fridges of the company, which contained 400 tons of meat.

Abu Fakhri Abu Ghais, from Beit Hanoun, explained how during the last massacre Israel killed his 17 sheep, and all his sons’ sheep, they destroyed all his farming equipment, worth over 15,000 US dollars. Israeli forces also destroyed the pumps for extracting the groundwater and the 20 tons of reserve of wheat seeds that Abu Fakhri had stored for the current year. The occupation also demolished the cabling that brought electricity to his village, Abu Safiya. He and his family now live in a tent without water or electricity, as his home was also destroyed. 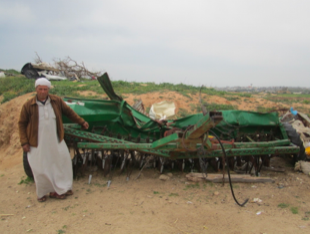 Abu Fakhri stands next to the remains of one of his seeding machines; the price of this machine is 10,000$ – photo by Miguel Hernández

He and his family now live in a tent without water or electricity, as his home was also destroyed. Given the blockade imposed by Israel on the Gaza Strip, the struggling government of Hamas informed him that they don’t know when they’ll be able to restore the power supply, as they do not have available wire that is long enough.

In a Bedouin village located at the North of Beit Lahia, Hassan Sharadkha invited the author and his companions for a cup of tea in the wood cabin that he has built next to the rubble of his home.  He showed us the pictures of everything he lost during the last summer at the hands of the Zionist occupation forces: 32 dunums of fruit and olive trees, 27 sheep and their stable, 2 cows, a 200 chicken farm, a horse, the water pump and the car he had just bought.

His older son, an electric engineer, was made unemployed because the solar panel company he worked for has also been bombed. 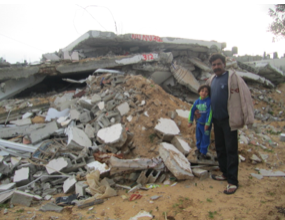 Hassan Sharadkha and one of his grandsons show us the ruins of his home. He lived in this 4 story house with three of his sons and their families – photo by Miguel Hernández

Ninety per cent of the Palestinian farmers in Gaza live in similar or worse circumstances. 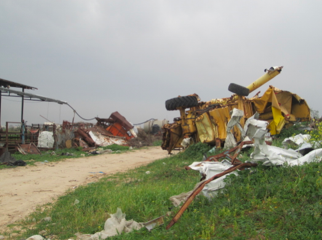 These attacks – against factories, farms, farming equipment and homes – were not by chance or accidental. These attacks demonstrate once again that the target of the genocidal Israeli colonialism is the Palestinian people itself, and that the war that has been waging the last 66 years, under cover of Europe and the US, is against a nation, Palestine, that they seek to wipe off the map.