Palestinian human rights defenders and international volunteers from the UK and the USA are travelling to Maghazi to deliver food parcels, water, and mattresses to 50 families.

“Maghazi was attacked once again today, and another two people were killed. A lot of families don’t want to leave their homes and they’re being forced from their land due to the very real threat of shelling and Israeli rocket attacks. I really want to concentrate in this area as many people live close to the borders and are therefore in very dangerous situations. I think that Magahzi is often neglected both in the media and with humanitarian aid.” Stated Rina Andolini, UK activist now in Gaza.

Ashraf Kulab, director of the Maged Women’s Association and resident of Magahzi, spoke to the International Solidarity Movement (ISM) about the situation is his region. “Areas of Meghazi have been completely destroyed, in the eastern part of the refugee camp you can’t recognise the streets, people don’t know where their houses were, it is just rubble. There is also a serious water problem; people are just not receiving aid and the crisis is growing.” 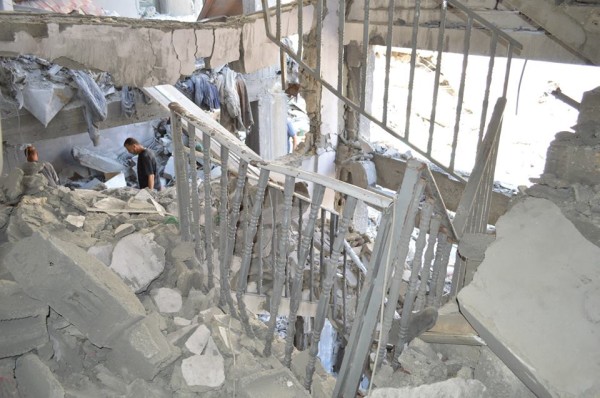 Photo from Maghazi on August 7th (photo by Rina Andolini).

Al-Fatiha Global and a group of private donors are supplying the aid delivered to Maghazi today.

According to the Gaza Ministry of Health, as of August 7th, 1888 people have been killed and a further 9804 have been injured since this attack began on July 8th.

This is not the first time international volunteers have travelled to areas ravaged by the Israeli military to distribute humanitarian aid. On August 4th Palestinian human rights defenders, joined by volunteers from Sweden, the USA and the UK, drove to Rafah to deliver water, food, and mattresses.