The entrance to the harbour was yesterday blocked for cars and other vehicles, but it was no problem to enter by foot. No one tried to stop me; there was no one there to stop me. 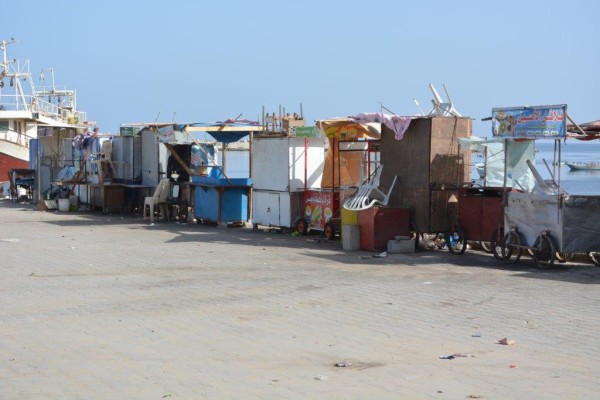 The sentry box, where the police are always calling me by name and trying to invite me in for a coffee and a chat, was closed. I looked around. The harbour, a place that is usually bustling with life and is a popular place for picnics, was noticeably deserted. I got the feeling that I was there without permission. The night before, I stood on the roof of the building where I live and saw two missiles hit just beyond the harbour. The target was, as I later could read, a building belonging to the port police.

Memories came back from the interviews I had with released fishermen and what they had to say about the interrogations, that the interrogators questioned them specifically about these buildings, how many people they were manned by, if the Port Police carried weapons.

To my surprise, I discovered that I was not alone in the harbour. On board some of the boats were people, but they were few. Perhaps they felt they were there without permission, as I did, none of them waved at me to come closer, but I didn’t try to contact them either.

I left the harbour, went to a nearby beach cafe, sat down for a moment and looked around at all the empty chairs. No one, including staff, was there. I stayed for a while, seemingly invisible under the parasol for the drones circulating above.

Heavy shelling from the sea could be heard. I received a text message from a friend in a refugee camp a few kilometers from where I sat. The situation was insane there, no one dared leave their homes, and drones seemed to fire off missiles at everything that moved. Detonations could be heard from where I was sitting.

The usually busy streets up towards a central square were deserted. Only occasional cars passed by, mostly press cars driving at high speed hunting for the latest attacked target, and a moment later, running in the opposite direction, an ambulance.

The shops were barred. This area, one that always reminded me of the hysterical Christmas shopping I witness yearly in Europe, was as deserted as the beach. And out of nowhere came the memory of an old song again, Ghost Town by The Specials. But totally deserted it was not. Three men in blue flak jackets with ‘Press’ written across were heading towards me. One of them recognised me, he came up and greeted me, asked if I wanted to come with to Shifa hospital.

I declined, but didn’t say why. There is life I want to see, it is life that I need, not death and suffering.