The Palestinian Centre for Human Rights (PCHR) is strongly concerned by Israel’s conduct of its offensive on the Gaza Strip, and in particular by the widespread punitive targeting of homes belonging to members of Hamas and Islamic Jihad.

In recent days, the Israeli air force has conducted two phase targeting of fighters’ homes whereby a ‘warning’ is issued to the house in question so that it may be evacuated. This warning takes the form of either a dud missile (termed ‘roof knocking’) or a phone call. The house is then subsequently targeted and destroyed, typically 15 minutes later. 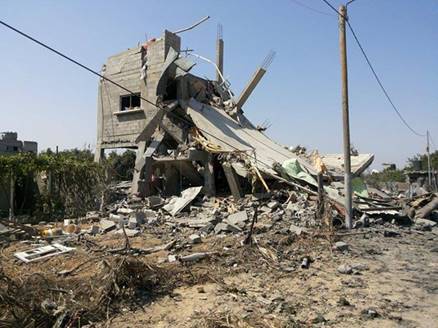 PCHR highlights that during active hostilities, only fighters and military objectives may be targeted. Civilians and civilian objects are protected from direct attack.

Article 52(2) of Additional Protocol II to the Geneva Conventions defines a military objective as: ‘those objects which by their nature, location, purpose or use make an effective contribution to military action and whose total or partial destruction, capture or neutralization, in the circumstances ruling at the time, offers a definite military advantage.’

Unless a home is being used to ‘make an effective contribution to military action’ – i.e. unless it is being used to store weapons or as a base from which attacks are launched – it cannot be considered a military objective. A home cannot be classified as a military objective merely because it owned by a fighter. Instead, it must be recognised as a civilian object and protected from direct attack. Issuing a warning does not remove this protection from direct attack.

Significantly, Article 52(3) of Additional Protocol II to the Geneva Conventions clearly states: ‘In case of doubt whether an object which is normally dedicated to civilian purposes, such as a place of worship, a house or other dwelling or a school, is being used to make an effective contribution to military action, it shall be presumed not to be so used.’

From the facts of the cases documented by PCHR, in the majority of instances there does not appear to be any military necessity justifying the destruction of Hamas or Islamic Jihad members’ homes. To-date, no secondary explosions have been documented indicating that the houses were used for weapons storage. PCHR highlight that the Gaza Strip is one of the most densely populated areas in the world, and that the targeting of homes inevitably results in significant collateral damage to individuals and property nearby.

PCHR is forced to conclude that the houses are being destroyed as a ‘punitive’ measure, targeting members of Hamas and their families. PCHR notes that Israel has recently resumed its policy of punitive house demolitions in the West Bank. This appears to be a continuation of the Dahiya doctrine, whereby civilian suffering is deliberately caused in order to act as a deterrent. This doctrine was developed during the 2006 Lebanon War, and continued during Operation Cast Lead.

The direct targeting of civilians and civilian objects is a war crime. All suspected war crimes must be investigated and, if appropriate, those responsible must be prosecuted.