New
Home / Nablus / “What Happened to your Hand?”

“What Happened to your Hand?”

On March 22nd 2013, Mohamad Walleed Qwareeq was near the local school in the northern district of the town of Awarta, located approximately 8 kilometers southeast of Nablus.

Mohamad, 22 at the time, was with a friend eating almonds, in a grassy field, when he came across a foreign object that would alter his life forever.

Mohamad opened what appeared to be a covered box which was triggered to explode. “They [the Israeli military] put them there in spring because they know all the kids play in the fields,” says Mohamad.

This box is apparently a common phenomenon in Awarta during the spring season, with two other serious incidents apparently being recorded last March.

As a result Mohamad sustained a multitude of serious injuries: charred legs with lacerations, tinnitus (constant ringing/buzzing in the ears), ageusia (loss of taste), the maiming/ loss of his right hand, a
decreased sense of smell, and a loss of sight approximately described as a 70% and 60% loss in the left and right eyes respectively. He can only see one meter out of his left eye.

Mohamad was brought to a hospital in Nablus to be treated; however with insufficient supplies to perform an operation on his eyes, the medical staff suggested he apply to have the operation in Jerusalem.

After what has become the standardized modus operandi from the DCO (District Coordination Office) to refuse proper medical treatment to Palestinians, Mohamad’s request was denied. Instead he was suggested
to visit Ramallah hospital and it is now too late to consider a full recovery.

Due to his tinnitus, most nights Mohamad cannot sleep from the buzzing in his ears. Mohamad has been struggling financially and has received almost no support. He is forced to pay for the vast amount of medication himself, with the only cost covered being that of the eye operation.

Mohamad doesn’t have the money to do a proper check-up on his eyes, and his family is poor. He cannot read Arabic since he was often leaving school to go work whatever jobs were available; therefore finding work now is extremely difficult. In addition, his father suffers from an intestinal illness that forced him to stop working; Mohamad has four sisters and two brothers all living in the same house.

To add to the torment, Mohamad, his brother, and a friend were walking on the main street in Awarta two months after the event, when they passed a temporary Israeli military checkpoint in the form of a military jeep. All three were detained on false grounds, with his friend and brother being interrogated for four hours, and with Mohamad remaining in custody for 18 days.

Apparently suspicious of his injuries, during his interrogation he was asked, “What happened to your hand?” 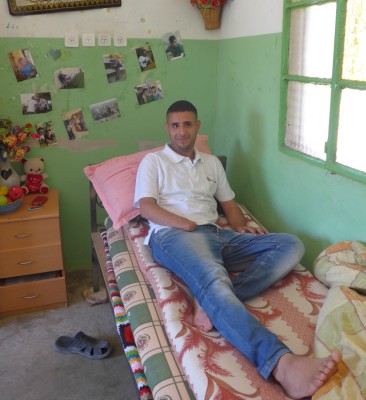 Mohamad Walleed Qwareeq suffered severe injuries in 2013 (aged 22), when an explosive device placed by the Israeli army near Awarta exploded