New
Home / Hebron / Nakba Day demonstration in Al Walaja: “Al Walaja is one of the symbols of the past and present displacement”

Nakba Day demonstration in Al Walaja: “Al Walaja is one of the symbols of the past and present displacement” 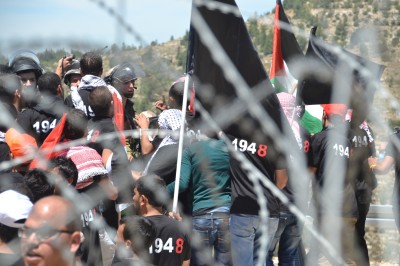 Yesterday 15th May, villages from Al Walaja marched for their right of return, on a day marking the 66th anniversary of the Nakba (catastrophe in Arabic). The demonstration was met with violent repression from Israeli forces with many tear gas canisters fired at the protesters.

In 1948, 70% of the population of Al Walaja was displaced and forced away from their land, as a result of the ethnic cleansing carried out by Israeli forces. After the six day war in 1967, half of the remaining land was occupied by the illegal settlements of Har Gilo and Gilo, leaving the village with only 15% of its original land.

66 years since the Nakba and the land in Al Walaja is in the so called “seam zone”. The seam zone is a term used to describe the land between the Green Line and the Apartheid wall. The seam zone is a closed area for Palestinians and is regulated by a permit system. Palestinians who live, work, and visit the area are forced to apply for a permit to enter the zone, controlled by Israeli authorities. The permit system in the seam zone consists of 12 different types of permits which, need to be renewed frequently and can easily be denied by the Israeli authorities. The apartheid wall (declared illegal by the International Court of Justice in 2004) is also planned to surround the entire village, which will leave the residents with one entry and exit point.

For the Nakba day this year, over 64 associations called for a demonstration in Al Walaja, calling for the right of the Palestinians to reclaim and return to their own land.

“Al Walaja is one of the symbols of the past and present displacement,” said one of the speakers at the demonstration.

Many protesters arrived from different areas in the West Bank, including children the nearby Aida refugee camp

The demonstrators gathered in a large tent at the end of the village, speeches were made, and then the head of the demonstration went downhill to where a metal fence separated an area of the village from the main road.

When the people attempted to pass over this “border”, approximately 20 Israeli Border police officers arrived and tried to stop this action, proceeding to throw stun grenades and fire tear gas canisters at the protesters. Palestinian youths then began to throw stones as several military jeeps arrived, along with approximately 100 Israeli soldiers and border police officers

The Israeli forces climbed up the hill, firing tear gas inside the tent, which was mainly filled with children and elderly men and women. The military forced the occupants out and proceeded to destroy the tent.

Fortunately there were no serious injuries, two journalists and two Palestinian youths were shot with tear gas canisters and received treatment from Red Crescent medics in from Al Walaja, and many demonstrators suffered from tear gas inhalation.