We connected with the Palestine Trauma Centre (PTC) before we had left the UK. Within a few days of contact with them they had resolved all of our complicated visa issues and have since proved to be the most wonderful hosts. In our first couple of weeks in Gaza we could often be found loitering in their building, sitting in on therapy groups, drinking some of the best tea in Gaza and getting impromptu Arabic lessons. 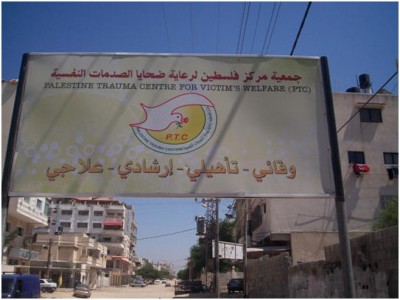 The PTC was set up in 2007 following extensive research by its founder Dr Mohamed Altawil on the effects of chronic psychological trauma on the Gazan population. The results of the research were staggering; of the 1.8million population, 700,000 were considered to require immediate psychological, social and medical assistance. The center was set up with the aim of providing free therapy, counseling, rehabilitation and preventative programmes to children, individuals and families.

Incredibly they have worked with 100 000 people so far…

The organisation is made up of paid staff together with a large number of qualified volunteers: Psychologists, psychiatrists, specialist trauma counsellors together with the necessary office staff and project managers. With the lack of employment across Gaza they are able to give newly graduated students from the universities the opportunity to gain experience and practise their new skills in the field.

They run workshops, groups and one on one session’s in their offices in Gaza City. The walls in the activity room are decorated with large posters and art the children have made. The first time we visited we both struggled to hold it together, it’s like seeing war through the eyes of children… drawings of tanks and bombs and bullet ridden bodies. There’s also large visual case studies documenting some of their success stories; the girl who was terrified of water because of the relentless sea to land attacks, and the child who with extensive one on one psychological support was finally able to grieve her mother killed in the conflict. 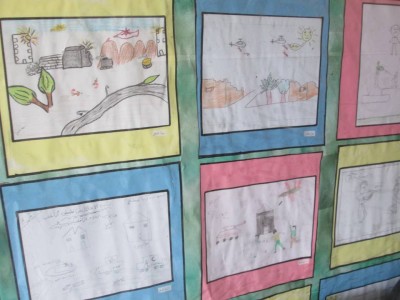 When needed, the PTC also takes its work directly out into the community, running groups in conjunction with other local associations or working directly with remote Gazan families. Most of these families wouldn’t otherwise have access to psychological support; due to the unaffordable cost of transport into central Gaza from the refugee camps or alternatively being fearful of the stigma attached to receiving mental health care at the centre itself. 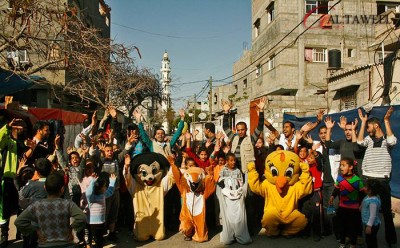 During Cast Lead a PTC rapid response team was developed, to deliver psychological first aid to as many people as possible. The team reached some of the most dangerous areas, and in some events were there before emergency medical crews had gained access. The team still exists and undergoes frequent development and is ready to respond whenever necessary.

Like most local based projects in Gaza, funding is a constant issue. Grants are attained project by project mainly from large NGOs (such as USAid, InterPal, Muslim Aid and Quaker funding). While currently they have multiple projects being funded previously they have gone 20 months without funding. Instead of closing the doors the staff continued their work – all as volunteers until new funding came through.

Their work is nothing short of inspirational, you can find out more about them here and here.