On Monday 21 April 2014 two International Women’s Peace Service [IWPS] volunteers were playing uno [a card game] outside with two children of the Abu Jamal family in Khan al-Luban, close to the Nablus-Ramallah road. Their elder brother Jimmy was plastering the bathroom and their mother was inside doing house chores.

IWPS and ISM volunteers have kept a permanent presence in Khan al-Luban this past week, as the family has been the target of attacks by the Israeli military and Israeli settlers from the surrounding illegal settlements. The family has been especially worried since the father,was arrested last Wednesday. Their fears proved to be well founded.

Below is the eyewitness account by IWPS volunteers of yesterday’s events:

At 6:45pm an Israeli army jeep pulled in front of a building across the street from the family house, then backed out of the driveway and drove along the road towards the back of the house. We all went into the center area and shut the doors, but went outside to photograph what they were doing as the three Israeli soldiers got out of the jeep and started coming over the fence and onto the roof. We climbed to the roof area where they had come onto the property. They asked one of the human rights volunteers to show her passport but she refused.

Jimmy stayed inside because he thought they might be looking for him. One of the young sons talked to the soldiers on the roof and the army called for back up.

After the soldiers began shouting at the mother and her child, Jimmy came out to the roof area, no longer able to stay hidden. He told the soldiers that they were on his family’s property and that they should stop yelling at his mother and younger brothers.

The soldiers became belligerent and hit him with their hands. They then attempted to handcuff Jimmy, and dragged him partway across the roof; by that time the cuffs were fully on. At that point they knocked him down and hit him on the head with the back of a rifle. Jimmy was unconscious from that time on and appeared to convulse slightly. They continued to beat him after he collapsed.

We all yelled at them that he needed an ambulance and the mother attempted to get one; she also called the neighbours on the phone. Some passing cars pulled over and three Palestinian men came to try to help the family. The soldiers responded by throwing a stun grenade.

Two more jeeps arrived, bringing an additional 8-9 soldiers; one of the jeeps had a siren on, leading us to believe that it was an ambulance until it arrived. The soldiers were fully armed with rifles, tear gas, and stun grenades. One threw a stun grenade that landed on the roof, a few feet away from unconscious Jimmy and his hysterical mother. The ambulance that she had phoned also arrived. At this point several soldiers grabbed Jimmy, still unconscious, by his arms and legs, attempting to put him in one of their jeeps, however the emergency services and the other Palestinians were able to take over, and got him into the ambulance instead. The mother went with her son to Rafidiya hospital in Nablus. An army jeep followed the ambulance.

The soldiers arrested one of the Palestinians and took him away in the first jeep. Another stun grenade was thrown directly at those of us on the roof as the army drove away.

As of 9:30pm, Jimmy was awake and in stable condition, although x-rays showed that he suffered from several broken ribs and multiple fractures. 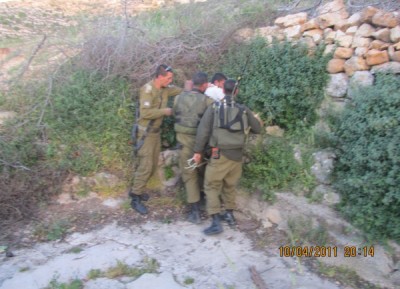