Israeli forces destroy a camp where farmers live and work

Yesterday morning at approximately 7am, the Israeli army destroyed five tents donated by the Red Crescent to a group of farmers in the area of Jawana, between the village of Beit Furik and the ruins of Tana.

Five military jeeps and two civil administration vehicles arrived with a demolition order and proceeded to destroy all the tents. Farmers reported that the Israeli soldiers told them they had to leave the land where the camp was located, claiming that it was in Area C [under full Israeli security and civil control]. They also said the area was being used as a military training ground.

Jawana is actually in Area B [Palestinian civil control, joint Israeli and Palestinian security control], and sources close by have said that there are no military training areas close to the village. There were three families living in Jawana’s camp, with a total of 22 children. The Red Crescent was supporting the families by donating the tents, but after this recent attack, it does not seem possible to replace them. The families are now in a very difficult position, Israeli soldiers have also threatened to take away their water tank if they continue to stay in the area.

This is not the first time Israeli forces have entered Jawana to destroy tents and farmers have been told by Israeli forces to make enquiries at Beit El check point in Ramallah and discuss the situation with the DCO [District Coordination Office]. Haled Khald Hanani, a 46-year-old man, lives in this camp with his wife and eight children, normally spending five months a year in the nearby valley and the rest of the year in Jawana. Three years ago, the Israeli army confiscated his tractor and he was forced to go to Beit El and pay 3000 NIS to reclaim it. Haled and his family have lived in this area for generations, however since 2013 the Israeli army has systematically destroyed and confiscated his property, approximately every three months.

Reports from local Palestinians say that Israeli soldiers destroyed more tents located one kilometer away from the Hanani family. Moreover, settlers from the nearby illegal settlement of Itamar have been entering the village of Beit Furik, provoking and harassing the local population. 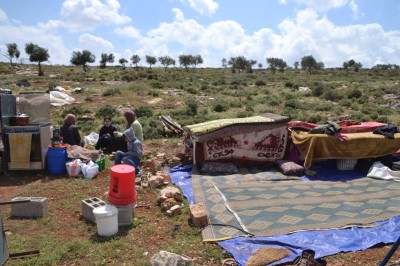