New
Home / Gaza / “The reason is to wipe out Palestinian culture and history”: A Gaza carpet factory under siege

“The reason is to wipe out Palestinian culture and history”: A Gaza carpet factory under siege 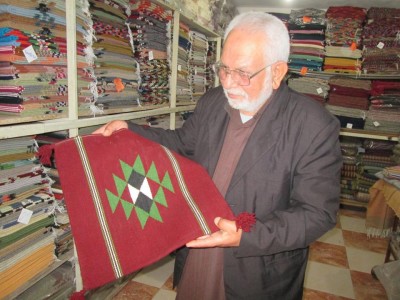 Before we settle down for a glass of Turkish coffee among shelves filled with neatly stacked, woven carpets Mahmoud El Sawaf, 68 years old, shows me around the small factory. The tour goes pretty quickly. There ‘s only a mechanized loom and a manual one. The market in Gaza is too small for more.

Before the siege escalated in 2007, he had a bigger factory, which employed 17 people with nine mechanical and 15 manual looms, and there were hundreds of producers around the Gaza Strip. Now they are only five left, and he is the only one with a power loom in production, but it has its limitations due to the daily power cuts. But the difficulties had already begun in 2005, says Mahmoud, a man viewing things in big pictures, when the Israelis left Gaza. 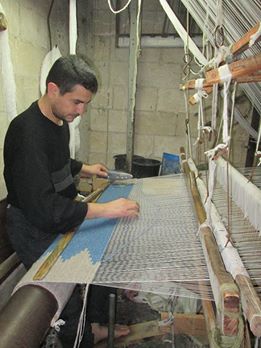 We are still occupied, he continues. They control our airspace, borders on land and at sea, our economy and our lives. The difference is that it happens without their physical presence. But when they were here, there were completely different conditions for economic exchange, even though Palestinians were often regarded and treated as second-class people. Mahmoud was permitted to travel and trade with the West Bank, Jordan and the Gulf countries. That is impossible today.

He points to a small pile of carpets lying on the floor that a Palestinian in Ukraine want to get delivered. But Mahmoud do not know how he will be able to send them there.

He says he is not bitter against Israelis, carefully pointing out that its population does not necessarily support the policies of their government. He does not lay not all the blame on the Israeli government, but also on the governments of the world that allows Israel to continue. But he hopes that the situation will change for the better. We have to, he says, otherwise we have nothing to live for. And he hopes Gaza’s Ark will show the world that Gaza needs commerce, to be a part of the global economy and not aid-dependent as it is now. 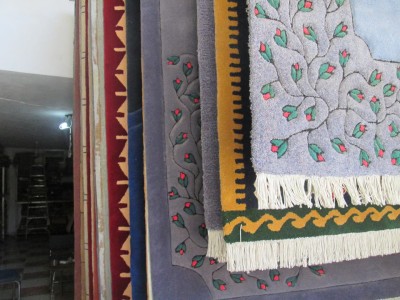 But one ark will not create a lasting change. It has to be many. The need is for continuity of supplies and an open export economy. This has not been allowed since the blockade began. One of the reasons is obviously to strangle the economy, but there is an even more important reason not many people think about, Mahmoud says, putting his glass down on the tray.

When you go inton the market you can find a plethora of different products, mostly junk, imported without problems. But when I try to get raw material to produce carpets, it is far more difficult. It can take months to get in materials, and usually only in small quantities. I was lucky to have had a stock before the siege began. When there are fewer producers, there is also less fighting over what little there is to get. The reason is to wipe out Palestinian culture and history. It is often called a security threat, and to some extent it is true.

Not for the Israelis, but for their government’s policy of denial. And this one of the reasons it is allowed to import mass-produced rugs, from China, while I will probably never be able to send those carpets to Ukraine. So it’s for more than just my own economy and survival of my company for which I hope from Gaza’s Ark, he concludes. It is for the whole Palestinian existence.