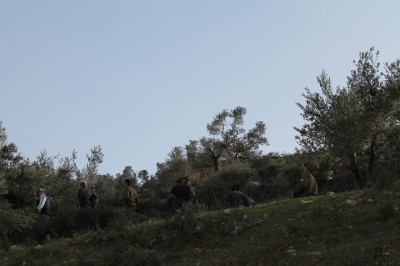 Israeli forces and settlers in Talfeet.

Farmers caught a settler cutting down olive trees in Talfeet, delivered him to the Israeli police and lodge a complaint toward him.

This morning, at around 10:30, three farmers working on their land in Talfeet caught a settler cutting down ” title=”olive trees”>olive trees in the area. Quickly joined by other villagers, they were able to capture him. They then kept him on the spot, waiting for the Israeli police.

At 12:00, the police arrived the place with the army. After the explanations of those involved, they finally left with the settler under arrest.

Indeed, this settler, known as “Kurein” by the locals, is sadly notorious in the area surrounding the illegal settlement of Eli for different attacks and attempts to damage state properties.

Later in the afternoon, the farmers met again the Israeli police, going with soldiers and members of the DCO, to notice the damages and lodge a complaint toward Kurein. The Israeli mandated for this task clearly said to the villagers that the two “troublemakers” (ISM observers) were unwelcome and that they had to stay away from the area. Following the incident, when the two volunteers came back to the scene to take pictures, all the broken branches had been removed from the place.

Furthermore, last month, settlers from Eli tried on several occasions to attack the Palestinian houses during the night, waking up the inhabitants and placing pressure on the families. After many complains from the villagers to the mayor, a dialogue has been set up between the Israeli authorities and the Palestinian representative of Nablus area to try to prevent the aggressiveness of the settlers. This attack threatens the quietness of the last days in the village of Talfeet.